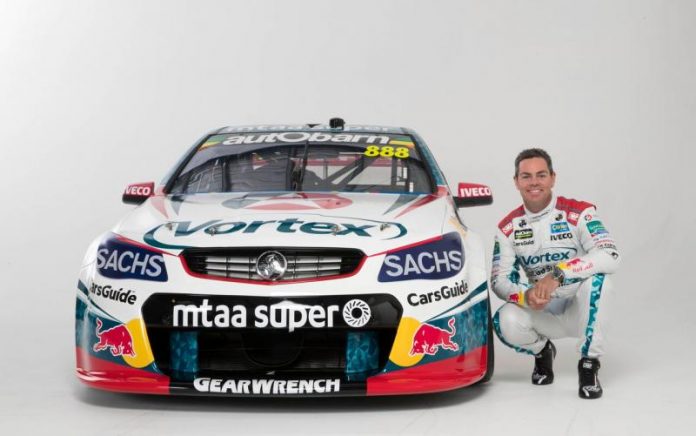 Caltex steps back, Autobarn in!

CRAIG Lowndes will no longer race under the TeamVortex banner in 2018, instead he will be racing under the banner of Autobarn.

Confirmed today by Triple Eight Race Engineering, Autobarn – which has been apartner of the team since 2013 – will have naming rights backing ofLowndes’ #888 Commodoreto be runas ‘Autobarn Lowndes Racing’ as part of the two-year agreement, which carries an option to continue for further seasons.

The sponsorship arrangement ties in with Lowndes’ two-year driving contract extension for 2018 and 2019.

“It’s fantastic to extend the team’s very successful partnership with Autobarn, as well as my own personal relationship with them, which began over 15 years ago,” Lowndes said.

“I am grateful of Autobarn’s support over these many years and that they’ve now chosen to take an even stronger position going forward. It has always been a relationship that I have valued highly.

“I’m pretty excited to roll out a totally new look and I’m looking forward to sharing it with fans early next year.”

With three championship titles and six Bathurst 1000 wins to his name, Lowndes is one of the undisputed greats of Australian motorsport.

Together, Lowndes, Triple Eight and Autobarn have clocked up 16 race victories since joining forces in 2013.

Caltex Australia will not be lost to the team, the fuel giant will continue its 12 year partnership with Triple Eight until at least the end of 2019 with branding on Lowndes’ Autobarn Commodore.