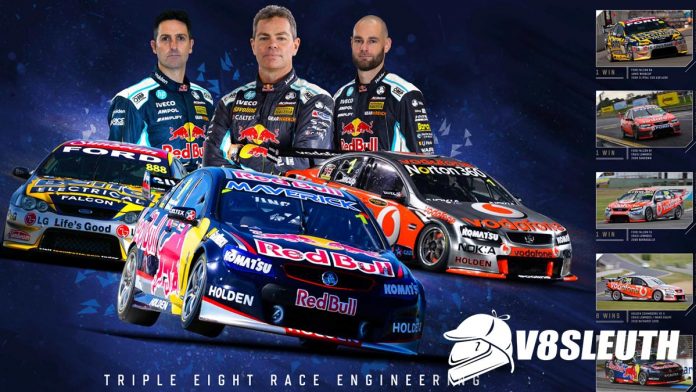 SHANE van Gisbergen’s victory in Race 23 at the 2020 Townsville SuperSprint brought up an historic milestone for Triple Eight Race Engineering.

The team became the first in Australian Touring Car and Supercars Championship history to win 200 races.

In honour of the milestone, V8 Sleuth is proud to release a limited edition collector’s print celebrating the team’s history-making triumph.

Signed by Jamie Whincup, Craig Lowndes and Shane van Gisbergen, this print is a must-have piece of memorabilia.

At least one of these drivers has been involved in all 200 race wins for Triple Eight dating back to the first scored by Lowndes at Eastern Creek in 2005.

This mammoth print – measuring 1 metre wide – is officially endorsed by Triple Eight Race Engineering and features each of the individual cars that have contributed to the 200 race wins.

The identifying chassis number and number of wins each car has contributed to the 200-win tally is also included on this incredible print.

Only a limited edition run of these prints will be produced (the final number will be determined by pre-orders) with each to be hand-signed by the three drivers.

This is an amazing collector’s print for Triple Eight, Lowndes, Whincup and van Gisbergen fans, celebrating an incredible feat in the sport’s history.

Order here now to make sure you don’t miss out.

Note – delivery date to be confirmed. Artwork is not final, subject to subtle changes before printing.