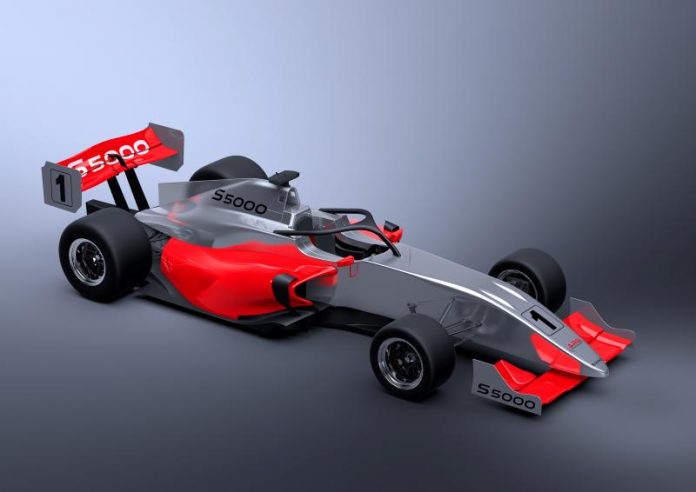 All-new FIA-approved chassis for long-awaited category, to kick off next year …

IT’S been a long time coming with plenty of speed humps and detours along the way, but the new S5000 category (formerly known as Super5000) will make its racing debut in 2019 as a CAMS-endorsed official category.

And the question of which of the two already-constructed chassis will be used as the basis of the new category has also been confirmed – neither!

S5000 has announced it will use a brand-new, 2018 FIA-approved chassis based on the all-new Onroak-Ligier carbon fibre monocoque with the five-litre Ford Coyote ‘Aluminator’ fuel-injected engine (the powerplant from the Formula Thunder 5000 prototype) producing 560 horsepower and a six-speed sequential transaxle Holinger gearbox as well as 17-inch wide rear tyres to be used.

The chassis will feature a halo protective device, making it the first Australian racing class to feature the FIA-mandated safety feature.

Former racer and co-creator Chris Lambden, who was initially behind the Formula Thunder 5000 concept before linking with S5000 organisers, has been confirmed as the inaugural category manager for the Australian Racing Group, which also holds the rights to TCR Australia.

V8 Sleuth was among a range of media organisations provided with today’s launch information under embargo, which originally called the category ‘Super5000’.

However, reportedly after discussions with Supercars Championship management, ARG has elected to change the name of the category to S5000 and duly issued revised press material and car livery graphics with ‘S5000’ signage in place of ‘Super5000’ very late last night (Wednesday August 22).

“It’s been an interesting pathway over the past three-and-a-half years to get to this point, but what we’re now going to be able to offer Australian motorsport is actually better than I had ever thought we could achieve,” says Lambden.

“The 2018 FIA-spec Onroak-Ligier tub, amalgamated with the V8 engine and Holinger rear end makes up a totally contemporary S5000 car that is going to blow people away.

“It will retain the modest downforce and mechanical grip elements that we have aimed for, so it’s going to be fast and safe and, at last, we have a serious, spectacular, high-level open wheeler category – perhaps Australia’s version of IndyCar …

“There have been a lot of people expressing interest in getting involved, and with CAMS now ticking off the car and the championship series, it is well and truly on.”

A racing calendar for 2019 will be revealed in due course with further details, including drivers and teams, tyre supplier and broadcasting arrangements all to be unveiled.