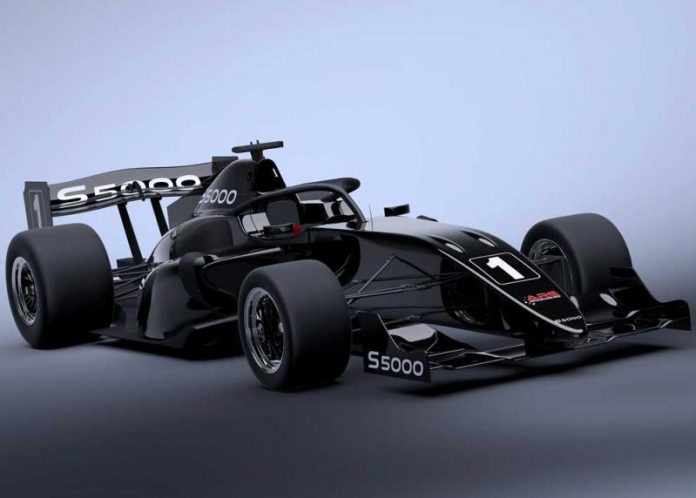 A pair of Supercars legends to handle the driving duties…

FANS will get their first chance to see the brand-new S5000 racecar in the flesh at the Coates Hire Newcastle 500.

The V8-powered car, set feature in Australia’s fastest open-wheel category, will turn demonstration laps across all three days of the Supercars event on November 23-25.

The demonstration laps will follow S5000’s official launch at Sydney Motorsport Park this Monday, an event closed to only media and competitors.

The Australian Racing Group is expected to announce more key details surrounding the category’s debut in 2019 at Monday’s official launch including a calendar for its maiden season.

A pair of touring car legends that started their careers as open-wheel guns will handle the driving duties in Newcastle.

Fox Sports commentator and four-time Bathurst 1000 winner Greg Murphy will drive the car on Friday, the Kiwi a race winner in Formula Holden and victor in the New Zealand Grand Prix before making his Supercars championship debut in 1997.

Supercars Hall of Famer and two-time Bathurst 1000 winner John Bowe will jump in the driver’s seat on Saturday and Sunday.

The Tasmanian claimed a pair of Australian Drivers’ Championship titles in the 1980s and raced in the original Formula 5000 category before switching his attention to touring cars.

“To be one of the first people to drive the S5000 car is really special,” Bowe said.

“These will only be demonstration laps, but it is really going to give the Newcastle fans a real treat. Big, loud, modern race cars around a spectacular track.

“I grew up in open wheelers, I love them, and the introduction of this category is the best piece of open wheel news in Australia since Formula Atlantic was here in 1981.

“With the new carbon-fibre monocoque, big engine and the cockpit ‘Halo’, it will be an awesome class. The aero will be good but not over the top, and the cars will be quick.

“If we’re ever going to have a chance to breed a race-ready Formula 1 driver in Australia, this will be the car and the category.”

After its Newcastle appearance, the car will then head to the Adelaide Motorsport Festival for more demonstration laps at the event on December 1-2.