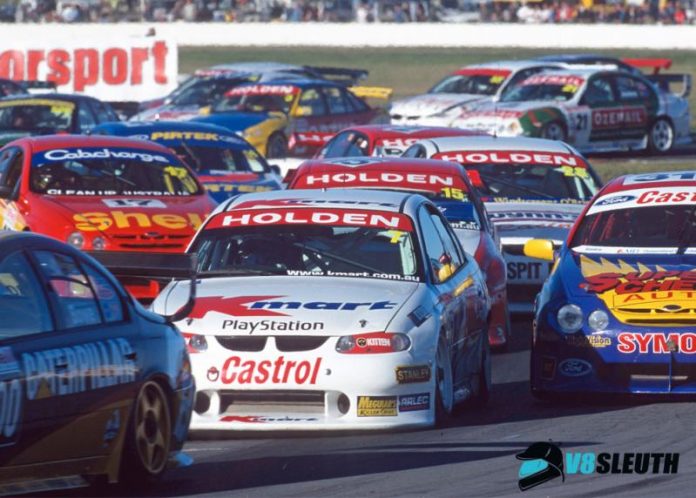 THE V8 Sleuth Touring Car Classic has been confirmed as part of the CAMS Shannons Nationals round at Winton Motor Raceway on August 31/September 1.

The V8 Sleuth Touring Car Classic will be live streamed as part of the Winton Shannons Nationals coverage and also viewable via the V8 Sleuth website and its social media channels.

ELIGIBLE CARS: What cars can race in the V8 Sleuth Touring Car Classic

It joins TCR Australia and S5000 as confirmed categories at the fifth round of the Shannons Nationals on the August 31/September 1 weekend.

A sponsor and tyre supply arrangement has also been finalised and will be announced in coming weeks.

The brainchild of V8 Sleuth MD Aaron Noonan and Kumho Super3 Series category manager Liam Curkpatrick, the event has been created primarily to cater for the huge interest in early era five-litre/V8 Supercars among collectors and prospective racers.

“There’s huge interest among car owners and fans of the early era of V8 Supercars covering the early 1990s to the early 2000s,” Noonan said.

“There were over 150 Falcons and Commodores built and raced between 1992 and 2002 and, with the vast majority of them still around, that’s a fairly large potential pool of cars which could race now and into the future.”

“The Super3 Series has evolved into a category with more and more young drivers starting on their pathway to Supercars in more contemporary machinery, which is fantastic,” Noonan said.

“So the time is right for the previous generation cars to be included in an event like this and encourage more of them to come out and race.”

Two-litre Super Tourers that competed in Australia and/or overseas and V8 Future Tourers will also have their own classes in the Classic.

“We also want to help unite owners with Super Tourers and Future Tourers too,” Noonan said.

“We know there are some of those cars around but they have, in essence, nowhere to race. The Classic gives them somewhere to enjoy their cars.”

Trophies for individual categories will be named in honour of drivers that made a significant contribution in each of the eras celebrated at the V8 Sleuth Touring Car Classic. These will be announced at a later date.

“Ultimately, the Classic is about celebrating a beloved era of motorsport, which is what V8 Sleuth does 52 weeks a year through its work in print, online and television – this event is the next step,” Noonan said.

For further details or to receive an information pack and/or entry form, please contact via the V8 Sleuth website HERE.