Home News ON THIS DAY: THE START OF THE AMBROSE ERA 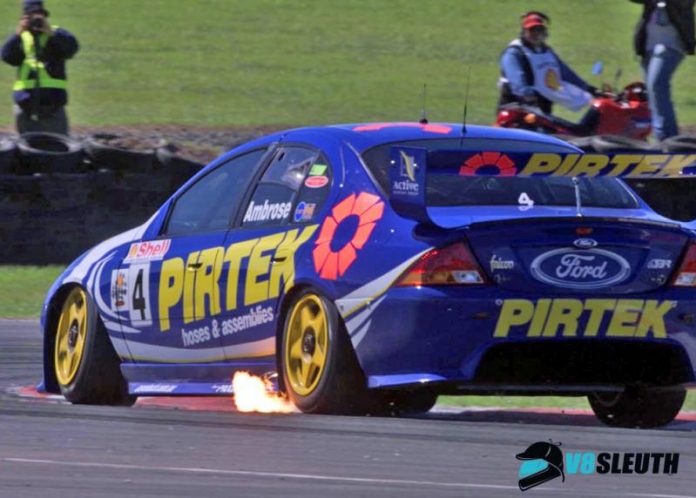 THE Marcos Ambrose era of the Supercars Championship began on this day in 2001.

The young Tasmanian had left Australia to pursue Formula 1 after finishing runner-up in the 1997 Australian Formula Ford Championship, returning to embark on his first full season of touring cars with Stone Brothers Racing.

Having spent several seasons racing in undermatched and underfunded machinery against fellow aspiring F1 stars, Ambrose signalled just how formidable a force he’d be by taking pole position for the non-championship races at Albert Park earlier in the month.

Ambrose started the season proper by again qualifying at the pointy end: he converted a provisional fourth on the grid to third in the Shootout.

Race 1 saw Ambrose moved up to second in the early stages before falling to fourth in the pit stops, while a similarly slow service in Race 2 left him sixth at the chequered flag.

Despite an impressive rookie season – which also saw him take pole on debut at Bathurst – Ambrose had to wait until Supercars returned to Phillip Island in 2002 for his first championship race victory, before going on to win two titles in a row and establish himself as a legend of the sport.

More on Ambrose’s AU and every other Ford Falcon V8 Supercar built from 1992-2017 can be found in our limited edition collector’s magazine The Falcon Files.

Here’s a few other tidbits from that Supercars race weekend 18 years ago:

– The Phillip Island round consisted of two days of on-track running for most teams, with practice, qualifying and the Top 10 Shootout held on the Saturday ahead of two races on the Sunday.

– I saymost teams because several first had to go through the stress of Pre-Qualifying on Friday. With just 32 grid positions for 36 cars, Supercars’ second-ever pre-qualifying session saw Jason Richards, Greg Ritter, Dean Canto and Tyler Mecklem packing up before the weekend.

– Mark Skaife won both races on the way to his second-straight championship win with the Holden Racing Team, and the fourth Supercars title of his career. Both races ran Safety Car-free, which was important because…

– The rules of the day saw the pit lane closed under Safety Car periods, just like it will be when Supercars heads to Phillip Island next month!

– Rick Kelly dominated both races of the opening Formula Holden round from pole position, the now two-time Bathurst 1000 winner and Supercars champion spending a season pursuing the Australian Drivers’ Championship before making his first Supercars starts in the endurance races.

– The Battle of Wills was getting underway in Formula Fords, future Bathurst 1000 winner Will Davison and future Indy 500 winner Will Power sharing the weekend’s two wins…

– And joining them on the grid for his first national Formula Ford race was a young karting graduate named Michael Caruso. The future Supercars race-winner had won the previous year’s Ford MAX Challenge, earning a full season with the new Ford Scholarship Team.