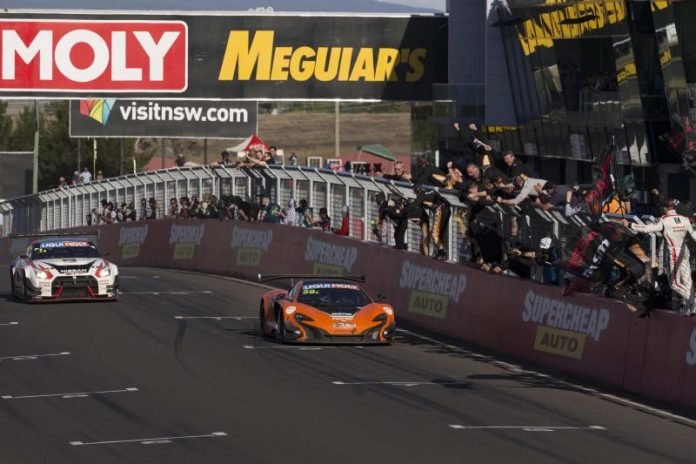 The field size for the Bathurst 12 Hour has some people upset, but not us …

THIS weekend marks the latest instalment of the Liqui-Moly Bathurst 12 Hour at Mount Panorama, an event the V8 Sleuth team are big fans of.

Now a thriving GT event that has morphed from its production car origins into an internationally relevant and supported race, the 12 Hour field this year is packed with quality though the overall field size quantity is down.

The production cars – a left over from the race’s old era – that used to make up the back part of the field are now gone, there’s less Invitational cars floating around and the move to making the event open to all-professional driver line-ups in GT3 has likely also affected things slightly.

Some will argue the more cars the merrier, but I disagree.

The slower production cars and heavily Amateur-filled GT3-spec cars have turned the 12 Hour in recent years into a punctuated, incident-filled race.

Having said that though, pro drivers in top cars haven’t been immune from making big errors either on occasion.

This year a final field of 40 turned up with a handful of cars already eliminated due to accidents in Friday practice, meaning a field in the mid to high 30s for race day on Sunday is what we’ll get.

And I reckon that’s not a bad number.

Does more cars in a race make the race better?

A constant complaint by race fans that the modern Bathurst 1000 ‘ain’t like the good old days’ given it now has a car count in the mid 20s is one that I don’t agree with.

We have seen some of the most competitive races with close finishes, plenty of drama and high-level driving.

The field is closer than ever and we are in the era of professional sport, after all, not backyard hobby racing.

And I’d also disagree that the 12 Hour needs to have 50-plus cars to be a good race.

After all, what constitutes a good race?

50-plus cars started but many of them didn’t last long (or at all!) or even compete for victory in their respective classes.

The same car led every lap and won by six laps.

As much as I love the ‘good old days’ and can appreciate the cars, teams, drivers and era, I am quite happy with nearly 40 cars in a 12 Hour race.

There’s plenty of variety, lots of different shapes and sounds and lots to enjoy – so enjoy it!