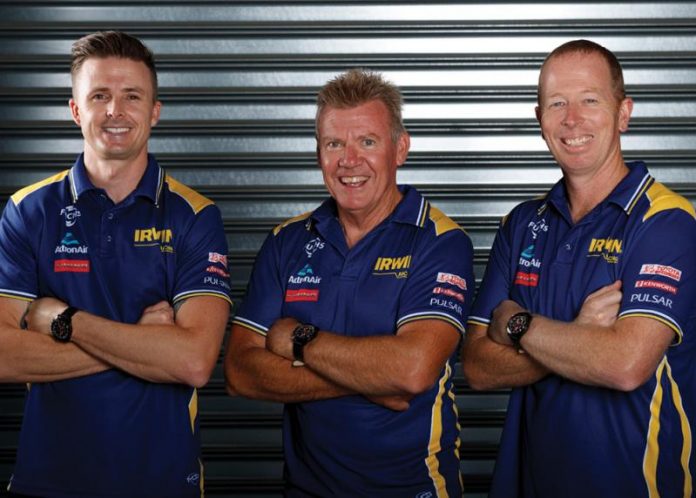 IN picking up Steven Richards, IRWIN Racing has made the key co-driver signing of the 2019 Pirtek Enduro Cup.

As widely expected, Charlie Schwerkolt’s squad confirmed Thursday that Richards will share driving duties with new recruit Mark Winterbottom aboard the No.18 IRWIN Holden at Bathurst, the Gold Coast and Sandown.

“After last year a new opportunity opened up for me and Frosty indicated a vision Charlie had for the team and how they were going to move forward which sparked my interest,” Richards said.

“Frosty and I have always kept in touch and remained good friends since we finished racing together.

“I’ve got alot of respect for him and his ability and I’m really excited to team up again and hoping to replicate what happened for us in 2013.”

While Triple Eight has assembled a ‘dream team’ by recruiting Craig Lowndes and Garth Tander, don’t overlook just how valuable Richards has been since becoming a hired gun in 2011.

He has won the Bathurst 1000 in three out of his last six starts, including last year’s popular triumph with Lowndes, while Richards and Lowndes are also the reigning Pirtek Enduro Cup winners.

Triple Eight boss Roland Dane sang Richards’ praises after he and Lowndes triumphed at Bathurst last year – despite him making a mistake entering pit lane early in the race.

“Richo’s performance was really good. He made a critical move and place over the #55 car with track position,” Dane told media after the race.

“It was very valuable in the context of it all.”

Richards is also the most experienced driver in the Bathurst 1000 field, set to make his 27th start this October. He and Winterbottom have 42 starts between them at Mount Panorama, making them the equal-most experienced combination with Lowndes and Jamie Whincup heading into the 2019 edition of The Great Race.

Where Richards may have an edge on Triple Eight’s dream team is in 2019 race miles.

With Bathurst now the first race of the Enduro Cup, co-drivers don’t have the benefit of the Sandown 500 as a prelude to the trip to Mount Panorama.

Lowndes and Tander have yet to reveal their 2019 plans beyond the Enduro Cup and this weekend’s Bathurst 12 Hour, but Richards has a full season of racing ahead of him as he returns to the Porsche Carrera Cup Australia.

Their calendar includes the traditional rounds at Mount Panorama and Surfers Paradise, ensuring Richards will have more track time at each venue than many of the other co-drivers on the grid.

“He’ll play a role all year, come to tests, come into the workshop and he’s another smart head we’ll have at the team,” Winterbottom said.

“With Bathurst being Round 1 (of the Enduro Cup) I think experience will be even more crucial than ever, and Richo has that experience with a Triple Eight car so he is the perfect asset to pick up with his ability, knowledge and talent.”

Richards has spent the past five seasons racing Triple Eight Holdens, the same kind that IRWIN Racing will have at its disposal in 2019, boosted by the increased technical relationship between the two squads for this season.

The team is also full of familiar faces, led by new team manager Steve Henderson and new technical director Phil Keed, both of whom have worked with Richards in the past.

All of those things add up to one conclusion: don’t look surprised if Richards edges one win closer to father Jim’s tally of seven Bathurst 1000 victories this October.