Home News ORAN PARK LIVES ON WITH DAVISON FOR ESERIES 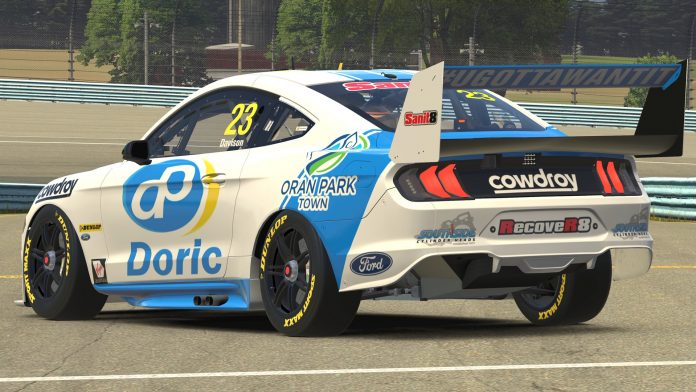 WHILE Oran Park Raceway is physically no more, Will Davison will carry a nod to the development that now sits on the circuit’s former site across the final two rounds of the BP Supercars All Stars Eseries.

The track closed in early 2010 for redevelopment into the Oran Park Town estate but it was laser-scanned for the iRacing platform prior to its demolition, allowing it to live on in the virtual racing world.

With Oran Park set to serve as one of the venues for the final round of the Eseries next week, the Perich family – the circuit’s long-time owners – reached out to Davison in recent days hoping to have a presence in Supercars’ virtual return to the track.

Davison’s #23 Ford Mustang will carry an Oran Park Town livery for next week’s Eseries finale, with his car set to carry the estate’s logos in tonight’s penultimate round. It will continue to carry V8 Sleuth backing as well.

The virtual race adds another chapter to the Davison family’s own history with the circuit, with Will’s father Richard and uncle Jon both racing top-level open wheelers at the circuit in its heyday during the 1970s and 1980s.

Davison himself has a winning history at Oran Park, taking pole position and winning both races in the 2001 round of the Australian Formula Ford Championship on his way to winning that year’s title.

One of his earliest Supercars Championship starts came at Oran Park with Team Dynamik in 2004, while Davison was also on the grid for the championship’s final appearance at the south-western Sydney circuit in the final round of the 2008 season.

Davison sat equal fourth in the Virgin Australia Supercars Championship prior to its pause for COVID-19 and currently sits seventh overall in the BP Supercars All Stars Eseries after eight rounds.