Home News OWN A PIECE OF FORD BATHURST HISTORY 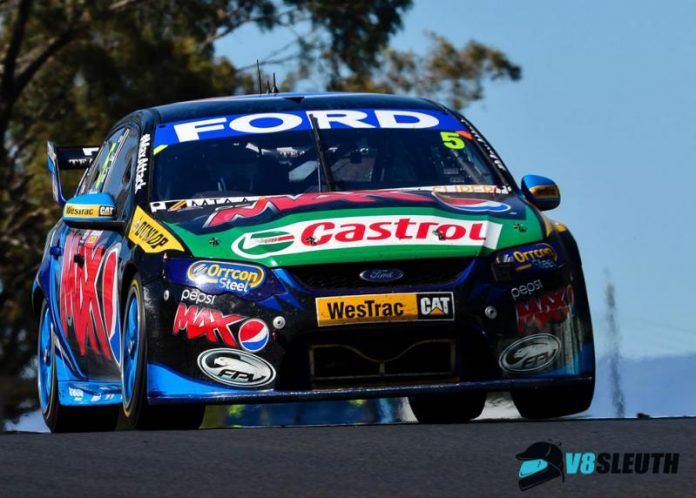 The 2013 Bathurst-winning Falcon offered for sale by Tickford Racing …

THE history-making #5 Pepsi Max Crew/Ford Performance Racing Falcon FG that won the 2013 Supercheap Auto Bathurst 1000 in the hands of Mark Winterbottom and Steve Richards has been released onto the market by Tickford Racing via V8 Sleuth.

One of only 14 Falcons to win the famous Bathurst classic over the race’s long history – and one of just 10 to survive today – the FPR 1214 chassis is to be restored to its 2013 Bathurst-winning state.

To register your interest, send a message to the V8 Sleuth office here.

This car claimed the team’s first Bathurst win and the first for a factory-entered Ford in 40 years since Allan Moffat and Ian Geoghegan had won in a Ford Motor Company-run Falcon XA GT in 1973.

At the moment it is the only Bathurst-winning Ford Falcon on the open market, making it undoubtedly a sought-after racecar to purchase.

Tickford Racing has engaged V8 Sleuth’s Aaron Noonan to manage the sale of its first Bathurst-winning car that will see the purchaser receive much more than just the car itself.

Including in the sale of the car will be supporting paperwork including original FPR 1214 setup sheets and driver notes, the all-important CAMS Log Book plus a special hardcover one-off colour book documenting the car’s full racing history assembled by the V8 Sleuth team.

The car will have the same engine number Ford V8 that powered it on race day at Bathurst in 2013 with number-correct 2013 Bathurst components fitted where appropriate and possible.

The new owner will also have a 10-lap drive/ride experience at Winton Motor Raceway included in the sale as well as access to 2019 event passes or Tickford Racing hospitality suite access (conditions apply).

“Bathurst-winning cars are very special and to be entrusted by Tim Edwards and his team at Tickford Racing to manage the sale of one of the team’s Bathurst winners speaks volumes of the respect of the V8 Sleuth name in the Supercars pit lane and wider industry,” says V8 Sleuth MD Aaron Noonan.

“Our mantra is to do much more than find a home for this car. It’s about creating a whole buying experience so someone can not only acquire a piece of Bathurst history but have the chance to sit aboard it at speed, be part of the team in 2019 and also be in possession of the car’s full racing history with access to material that otherwise is not accessible to the fan on the street.

“The holistic approach we take of arranging for as many number-correct parts as possible to be on the car for sale, researching thoroughly and accurately the car’s racing history, collating the authentic paperwork from within the team’s workshop and publishing a one-off, full history book sets a new benchmark in the industry for placing a significant car like this on the market.”

Tickford Racing’s engagement of V8 Sleuth is not the first time the sale of a significant Ford Falcon V8 Supercar has been handled by the organisation, having been engaged in 2013 by Dick Johnson Racing to successfully take to market the 2010 James Courtney/Jim Beam title-winning FG Falcon.

The FPR 1214 chassis was the fifth Car of the Future chassis logged with Supercars (chassis V8SC 005) and was raced in the V8 Supercars Championship between 2013 and 2015 by Mark Winterbottom, Steve Richards, David Reynolds and Dean Canto. It was also tested by Bathurst victors Will Davison and Chaz Mostert.

A race-winning car in both the main Supercars Championship and Dunlop Super2 Series, the car won three races in 2013 in the hands of Winterbottom at Winton, Hidden Valley and, of course, Bathurst alongside Richards.

The win ended a 10 year Bathurst drought for both Winterbottom and FPR and gave Richards his third Bathurst win and first in 14 years (since 1999).

Winterbottom took the car to a total of 13 podium finishes in the 2013 season and finished fourth in the championship. He took four poles in the car in 2013 at Symmons Plains, Townsville and Phillip Island (twice).

View the advertisement for the car here in the V8 Sleuth Showroom online.