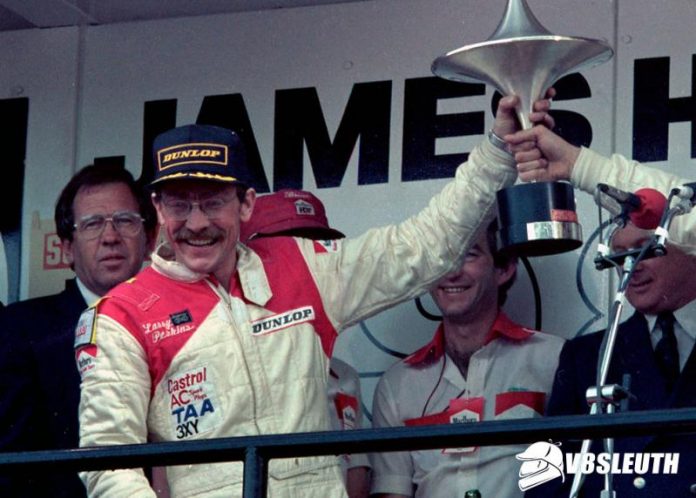 LARRY Perkins remains one of the most talented people in the history of Australian motorsport both in and outside of the racing car.

To say that he did it ‘his way’ would indeed be an understatement.

While he rose to the pinnacle of world motorsport to compete in Formula 1, it’s Perkins’ career in Australian touring car racing and, in particular at Bathurst aboard Holdens, that fans hold most fondly as their memories of ‘LP’.

A hard-nosed, self-taught, common sense engineer, Perkins made his first trip to Bathurst in 1977 and made all bar one of his 26 ‘Great Race’ starts at the wheel of Holden products.

Perkins was an integral part of Holden’s factory motorsport program of the early 1980s, joining the famous Holden Dealer Team in 1982 as workshop manager and co-driver to team owner/driver Peter Brock.

The duo went on to claim a trio of victories at Mount Panorama in 1982, 1983 and 1984, sharing Group C-specification Commodores to victory in ‘The Great Race’.

Perkins and Brock therefore became the second combination in Bathurst history to win the race three times in a row, joined by John Harvey in 1983 after the duo’s car had failed in the early stages and they swapped across to the team’s #25 Commodore.

“Peter and I got on really well, he was great on the PR side, I wasn’t interested in that and he was very happy for me to run the mechanical side of it so we had no clashes with it; it was a great time,” Perkins recalled.

While this Bathurst success is the obvious and commonly-referred to Perkins/HDT link, he first had relations with the Harry Firth-run HDT in the early 1970s as a mechanic and rallycross driver prior to heading off to Europe to race in open wheelers.

After three wins with Brock and the HDT at Bathurst, Perkins elected to leave the team midway through 1985, establishing his own Perkins Engineering squad for 1986.

Initially a privateer squad, Perkins’ team was soon after contracted in 1988 to run the official factory Holden race program on behalf of Holden Special Vehicles and Tom Walkinshaw.

With the carburetor-engined VL Commodore replaced by the fuel-injected Commodore model later that season, Perkins took the new car to second place in the car’s debut at the Sandown 500 alongside the late Denny Hulme.

With Walkinshaw’s team not running a factory program in the Australian Touring Car Championship the following year, Perkins was again contracted to supply services to ‘the General’, this time running a pair of Commodores in the endurance races under the Holden Racing Team banner.

From 1990 he returned to running his own Holden program, scoring three further Bathurst wins spear-heading his own Castrol-backed Commodores alongside the late Gregg Hansford (1993) and Russell Ingall (1995, 1997).

These days son Jack continues the legacy as an endurance driver with Walkinshaw Andretti United while his father continues with interests away from motorsport, including a widely-publicised archaeological find in 2018.