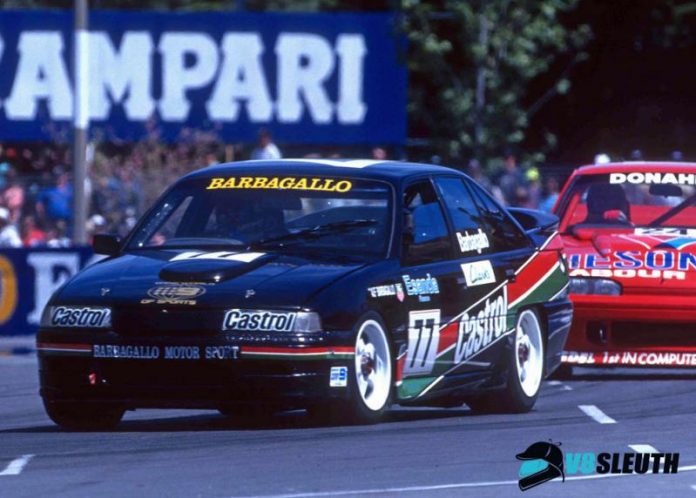 LAST weekend Jack Perkins was busy on the Gold Coast sharing a Mobil 1 HSV Racing Commodore with James Courtney but this weekend he’ll be on double duty.

In addition to driving the impressive Audi V8 Sports Sedan, the third-generation racer will compete in the Heritage Touring Cars Group A & C category at the Muscle Car Masters at Sydney Motorsport Park at the helm of a Perkins Engineering-built VN Group A Commodore.

The car, which was built for Western Australian customer Alf Barbagallo, is owned by David Gardner and, while he sampled the car briefly a few years ago at Wakefield Park, this will be the first time Perkins Jnr has raced in the Historic category.

“I haven’t drive this car since back then in 2014 at Wakefield Park but Dave Gardner, who is a great friend of Perkins Engineering, asked me to race it I was really keen to do it,” Perkins told V8 Sleuth this week.

“I’ve never raced one of the cars of that era and I was already going to be there racing Sports Sedans, so I am keen to have a fang in it!

“The biggest thing with the VN is that it has a five-speed gearbox with first gear down where second usually is, so that will take a little getting used to again.

“It should be fun. We’re not racing for sheep stations and there’s some really cool cars in the Group A field so I’m looking forward to it.”

The ex-Barbagallo Commodore had a long and storied life in Australian touring car racing, making its racing debut back in 1992.

Larry Perkins shared it with Barbagallo at the circuit bearing the car owner’s name in 1993, claiming victory together in the annual Wanneroo 300 endurance race.

The duo repeated the result two years later after the car had been updated to VR specification.

The car later raced in the hands of Grant Johnson and Nathan Pretty and spent time in the Konica V8 Supercar Series in the hands of Scott March and now-American-based Kenny Habul.

It has since been restored to its Group A VN specification by owner David Gardner and is presented in the livery as it raced in 1992.