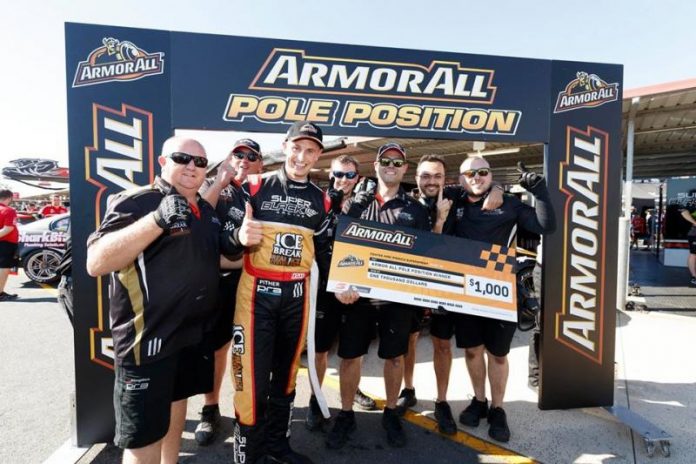 SUPER Black Racing’s normally reserved Kiwi pilot Chris Pither has fired back at News Limited Supercars journalist James Phelps after comments made by the reporter on last week’s episode of ‘Inside Supercars’ on FOX Sports.

In a week where Pither and his Super Black team were mourning the deathof team owner Tony Lentino, Phelps made comment relating to Pither’s slide back into the pack from polein the early laps at Ipswich on the Saturday.

A specific comment relating to the race looking more like a reverse grid race withPither being on pole has been taken by many as an insinuation that Phelps didn’t believe theformer V8 Ute champion deservedhis P1 start or the $1000 ARMOR ALL cheque that went with it, despite clearly setting a time faster than every other driver in the field.

“The fact that it was Phelps, is pretty much water off a duck’s back,” Pither wrote to his supporters on Facebook this afternoon.

“I personally thought it was a pretty cheap shot at my team and I in a week that was one of the highest points (in) winning pole and lowest points with Tony’s passing.

“Had the comments been made by someone with Motorsport credibility like Mark Fogarty, Mark Skaife, Bruce Newton, Greg Rust, Neil Crompton or Greg Murphy, people that I respect (and) people whose professional opinions matter, it probably would have cut a bit deeper.

“Hindsight is a wonderful thing and when I get my next pole I can assure all my supporters things will be different. Yes, I stuffed up. I was too soft on the opening laps and yes, I didn’t want to ruin someone’s championship fighting too hard and ending up in the gravel trap.”

Pither said that Phelps’ comments regarding Queensland Raceway had disappointed him, but that the reporter’s constant negativity relating to Supercar racing was wearing thin.

“Not the fact he had a shot at my team and I by saying the race we started on pole looked like a reverse grid race. More the fact, his negativity to the sport that we all love. Does the sport do anything he likes?

“He kept banging on about confirming the calendar and the fact nobody on the panel could answer him. I’m no businessman but I can imagine every business is the same; they keep things as confidential as they can until it can be confirmed.

“It’s not ‘survivor island’, not everybody gets a vote!

“I know this will probably leave me open to get smashed in his next article as he is a professional wordsmith, but I wanted personally to voice my opinion.”

Pither, who has enjoyed long-time backing from Ice Break Coffee through V8 Utes, the Dunlop Series and now the Virgin Australia Supercars Championship, also took time to address the issue of pay drivers in the category.

“Every driver in the field is a pay driver,” said the Kiwi.

“Someone has to pay the bills. The driver either brings a sponsor that is loyal to them or a team recruits a driver that has a great following which in turn makes sponsors want to get on board with the team.

“We have a field with a qualifying session often within one second from first to last. How many other categories can claim that?”

Pither became the 60th driver in ATCC/VASC history to record a pole position when he qualified fastest for the Saturday race at Queensland Raceway.

He will team with Aston Martin GT ace Richie Stanaway for the Sandown, Bathurst and Gold Coast endurance races.