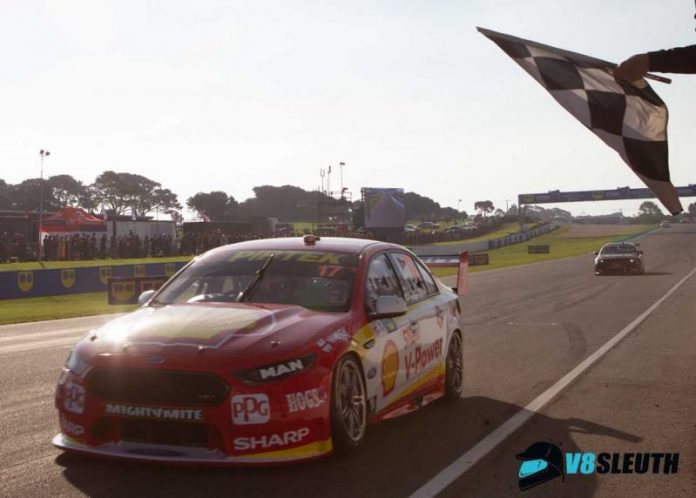 Scott McLaughlin’s ‘special’ FG X to be kept for posterity…

THE Ford Falcon FG X that Scott McLaughlin used to record the first 2-minute 03-second Supercars lap of Mount Panorama could be bound for the United States, pending series approval.

All 16 of his race wins and 29 pole positions since the start of 2017 – including that stunning Top 10 Shootout lap at the 2017 Supercheap Auto Bathurst 1000 – have come aboard the same Ford Falcon FG X, McLaughlin’s current chassis being the only one he has raced since joining DJR Team Penske.

Its tally of victories makes it the second-most winning Falcon chassis of the Supercars era, second only to Marcos Ambrose’s Pirtek/Stone Brothers Racing Falcon BA of 2003-2005.

McLaughlin will campaign his car for the final time at the Coates Hire Newcastle 500, where he will look to convert a 14-point lead into his maiden Supercars Championship victory.

Next year he will race a brand new Ford Mustang, with the team not currently planning to convert McLaughlin’s “special” Falcon with the new bodywork.

“At this stage it’s not being converted, we’d like to keep that one for posterity,” DJRTP team principal Ryan Story told the FOX Motorsport Supercars Podcast.

“We’ve got two cars that are pretty special to us in terms of our DJR Team Penske history.

“One is the car that Fabian drove last year which has been our spare this year, that won our first race as DJR Team Penske (at Symmons Plains 2017). Then of course Scott’s chariot, which did the 2m03.8 around Bathurst in the Shootout and won all those races.

“They’re two very special cars and we’d like to keep them and hang onto them as they are.”

However, the final home for McLaughlin’s car could potentially be withTeam Penske in the United States.

With an IndyCar and a NASCAR having already made their way across the Pacific to DJR Team Penske’s headquarters, it’s a favour the Supercars squad would like to return.

“We’ve wanted to do that for some time, even potentially sending a show car over there, but the series has been quite resistant to that.

“But I think now that the Falcon will no longer be an eligible Supercar, I think we might have a little bit better an argument for making something like that happen.”