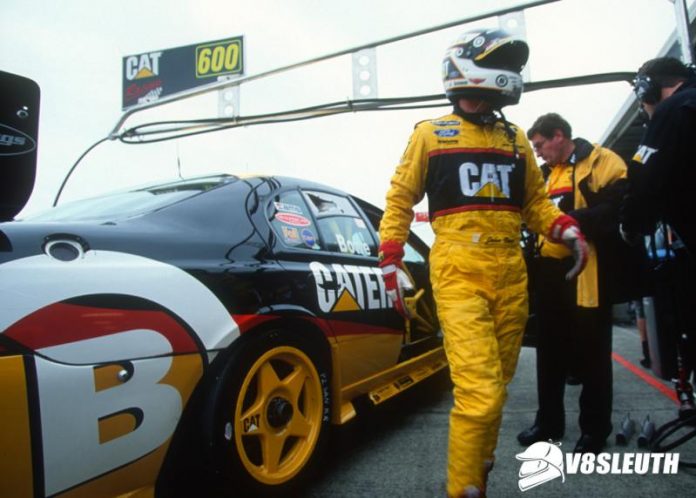 SUPERCARS Hall of Famer John Bowe has opened up on his sudden axing from John Briggs Motorsport late in the 2001 Supercars Championship season.

The 1995 series champion was the guest for the first episode of The V8 Sleuth Podcast powered by Doric, the one-on-one chat with Aaron Noonan unearthing a few forgotten tales and funny stories from his life in motorsport.

Along with telling stories about his yearly attempts to talk contracts with Dick Johnson and how he upset the late Bob Jane by ‘christening’ the Thunderdome, Bowe also gave his take on his sudden departure from CAT Racing after the 2001 Bathurst 1000.

He continued to race for the team after its purchase by John Briggs and move to Queensland – up until the Mount Panorama enduro in 2001.

Listen to the John Bowe episode of The V8 Sleuth Podcast powered by Doric below:

From seventh on the grid, Bowe charged into the lead in his opening stint and set a new Supercars lap record before the #600 Ford’s bid for victory came unglued.

“I’ve never discussed it with John Briggs (since), to be honest,” Bowe told The V8 Sleuth Podcast.

“We had a car that could win the race, it was fast enough. Simon Wills – who was a very fast driver – broke the lap record by a tenth of a second from my time.

“That’s what he was encouraged to do – too much – by John. He made a very audacious pass in to the last corner and we ended up with a busted car.

“I was really quite annoyed with it because it’s not always that you’ve got a car that can win. So I told him he was a dickhead.”

Bowe goes into greater detail on what he believes was the driving reason behind his departure, and revealed how the axe fell via a phone call – but not from his team boss.

“He didn’t even have the balls to sack me. He got Howard Marsden to do it,” Bowe said.

In the same phone call in which he was fired, Marsden, then head of Ford’s motorsport activities in Australia, presented Bowe with two options for the 2002 season, eventually signing with Brad Jones Racing.

The podcast sees Bowe explain what his other Supercars option for 2002 was – and no, it wasn’t Prancing Horse Racing – while other highlights from the wide-ranging chat include:

– The Bud Mustang, and how it was nobbled in the interests of parity

– The tale of the whereabouts of his Tooheys Top Gun jacket, which he received for winning the 1994 Bathurst 1000

– The time he fenced Craig Lowndes – and got away with it!