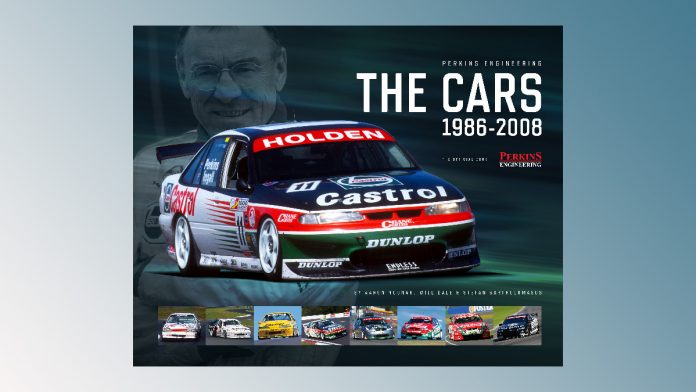 The release of ‘Perkins Engineering: The Cars, 1986-2008’ coincides with the 35th anniversary of the creation of the Perkins team and follows V8 Sleuth’s sold-out books covering the cars built by the Holden Racing Team (2017) and Dick Johnson Racing (2020).

Like the HRT and DJR examples, the Perkins Engineering book will be a hardcover, individually numbered and limited-edition collector’s item, each hand-signed by the six-time Bathurst winner himself.

Perkins Engineering built more than 50 Commodore race cars for both its own racing program and privateer customers as well as more than 200 engines for touring cars, AUSCAR, Formula Holden, road car and boat use.

All of those Perkins-built cars will be covered in-depth utilising Perkins Engineering’s official records, a collection of never-before-published photographs and insights from the key players.

“This book is a huge project and one we’re thoroughly enjoying bringing to life, working closely with Larry and his son Jack,” said V8 Sleuth MD Aaron Noonan.

“The response to the news last year that a Perkins Engineering Cars book would be produced has been incredible and we’re constantly being asked when pre-orders will open.

“Well, they are now open and considering how quickly our HRT and DJR Cars books sold out, I’d urge anyone interested in securing one of these collector’s items to pre-order to avoid disappointment.”

The new release starts with Perkins’ first ENZED Commodore Group A VK built in 1986, includes the histories of the three Bathurst-winning Castrol Commodores that conquered the Mountain in the 1990s and ends with the last Jack Daniel’s Commodore VE.

It features Commodore models including VK, VL Group A SS, VL Group A SV, VN, VP, VR, VS, VT, VX, VY, VZ and VE and all of the iconic Perkins Castrol and Jack Daniel’s race cars as well as the wide range of privateer cars built by Perkins Engineering.

Each car’s racing history is presented in a stunning layout along with a special focus placed on each car’s performances in ‘The Great Race’ at Bathurst.

The book will be printed in Australia via green printing methods and is currently scheduled to arrive in approximately October/November 2021.