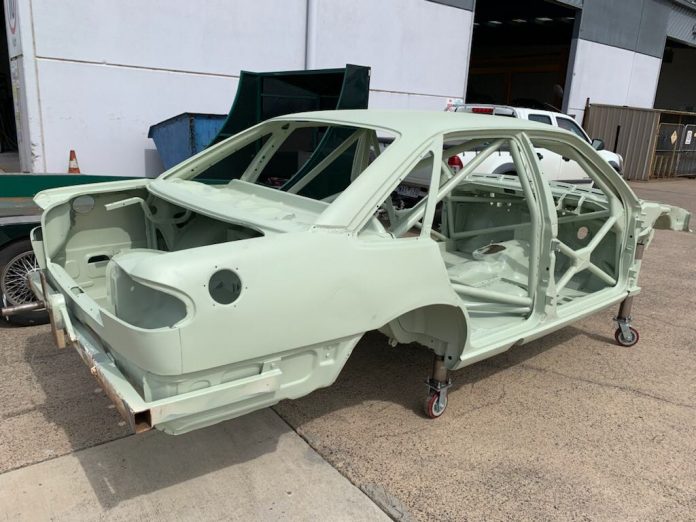 A FULL sandblast restoration of a former V8 Supercar Holden Commodore that finished as top privateer at Bathurst in 1997 is underway.

Former V8 privateer Bob Jones is the car’s owner; however, it wasn’t a car he raced during his touring car days.

Instead it’s the ex-Malcolm Stenniken Commodore VS that Jones’ son Robert first raced when he made the move into V8 Supercars from Formula Ford in late 2001.

He drove it in selected events over the following few years, though his undoubted highlight behind its wheel was finishing as top privateer and seventh outright in the 1997 Primus 1000 Classic with Peter Gazzard co-driving.

Stenniken retired from V8 Supercar racing off the back of this impressive achievement and sold the car to D’Arcy Russell, who raced it in 1998 (its Playboy livery from the endurance races remains memorable for many fans!) and 1999, before the Jones’ acquired it in late 2001.

The VS was parked mid-way through 2002 when the Jones’ debuted a new Paris Acott-built VX Commodore (that car is also still owned by the Jones’), though the VS was wheeled back out for Paul Freestone to drive in the Winton round of the ’02 Konica Series and the non-points Bathurst race that October.

The car has lay idle for nearly 20 years before the Jones’ recently began the mission of restoring it to its former glory.

But therein lies one of their dilemmas – which livery should they return it to?

“We’re just finishing the body at the moment. We’re putting in a new boot and rear floor into it as it’s been welded and repaired many times and needs a birthday. But once that’s in there it’s off to be painted at Car-Trek in Footscray.

“I’m still not sure what livery we’ll do it in. I really liked the last livery it had when Robbie raced it in the Colors Unlimited black and green colours, but plenty of people like the Playboy livery it ran in, so we’ll decide on that soon.”

The Commodore’s engine has been taken back to John Sidney Racing to be rebuilt, however Sidney and Neill ‘Part’ Burns pulled it apart to find it to be in very good condition.

“They pulled the engine apart and I dropped into the workshop the other day and they said, ‘geez, we don’t know why we pulled it apart now, it’s brand spanking new’!” says Jones.

“It must have been fresh back in the day and hasn’t done any work since then. But after all those years of sitting around I wasn’t going to put it back into the car without pulling it apart and having it checked over. We’d pulled the engine out of the car back in the day and it had been sitting under a bench in the workshop!

“The whole project is taking shape pretty well. We’ve got air jacks and fittings and wheel nuts going to be high pressure water jet blasted and getting them all totally re-anodised, so it’s coming together quickly.

“We’ll get it out onto the track when it’s finished, I might get in and have a skid and Robbie can have a drive and we can out a couple of times a year and have a bit of fun in it.”