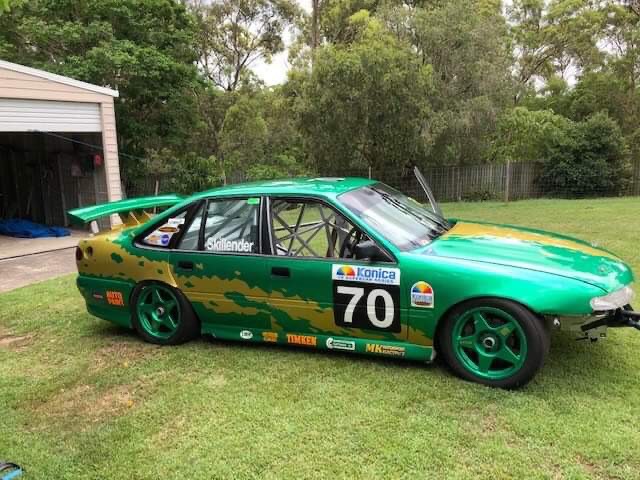 A V8 SUPERCAR privateer Commodore that won the very first Bathurst Super2 (Konica Series) race at Mount Panorama is being prepared to return to the track.

Long-time Heritage Touring Cars competitor Michael Logiudice purchased the ex-Graphic Skills Commodore VS formerly driven by Wayne Wakefield a couple of years ago as a rolling chassis and has nearly got it back to running order – inclusive of a fresh Garry Rogers Motorsport engine.

Wakefield drove the car to victory at Bathurst in 2001 in the first non-championship Konica Series race held at the Mountain.

“After Bathurst 2001, where Wayne Wakefield had put the car on pole and won the race, the car only went out one more time but had engine issues,” he said on the Australian 5 Litre Touring Car Association’s Facebook page today.

“They then removed the engine and gearbox and the car has sat since.”

He plans to run the car at future Australian 5 Litre Touring Car Association events once complete but is currently in the process of finding a Holinger gearbox for the car.

DON’T MISS OUT: Celebrate Holden racing history by getting a copy of ‘Racing the Lion’, our Holden illustrated history book. Order your copy here now.

Heffernan raced it in Price Attack colours from 1997 to 1999 before it was sold to Graphic Skills’ David Skillender and campaigned by Wayne Wakefield and Dean Canto in that year’s Queensland and Bathurst endurance races.

Repaired after being heavily damaged at Bathurst when Canto and Darren Pate came together on the run up to the Cutting, the car returned to racing in a unique green and gold livery in 2001 with Wakefield at the helm.

He used the car to finish second in the Lakeside round of that year’s Konica Series up against more modern VT Commodores being driven by the likes of Paul Dumbrell, David ‘Truckie’ Parsons, Leanne Ferrier and Simon Wills, and went on to win the very first Konica Series non-championship Bathurst race later that October.

Skillender gave the car its last V8 Supercar appearance at Mallala in 2002 at the final round of that year’s Konica Series.