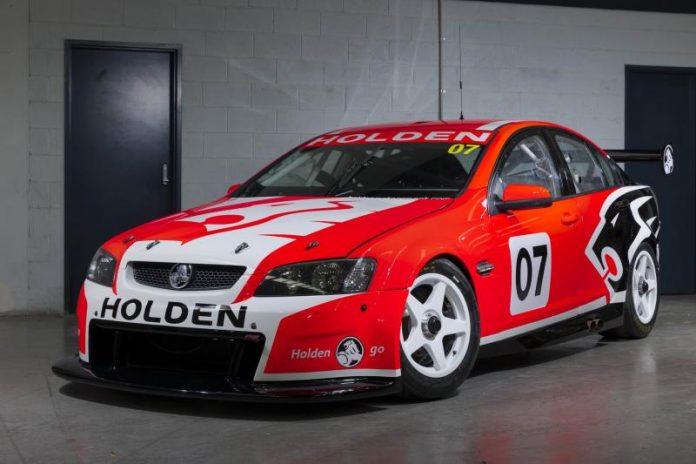 THE car that started the pathway for the Holden Commodore VE/VE Series II becoming the most winning car in the history of the Australian Touring Car/Supercars Championship at the time is now on the market in the V8 Sleuth Online Showroom.

View here for the listing in the Showroom including price and contact details.

Walkinshaw Racing chassis 001 (WR 001) has been returned to its totally unique 2006-era testing livery with a freshly rebuilt Walkinshaw engine and brand new gearbox in place.

The prototype Commodore VE race car created plenty of headlines when it was unveiled in October 2006 as the racing version of Holden’s ‘billion dollar baby’ road car project.

Originally built by Walkinshaw Racing, ‘WR001’ was used for aerodynamic and parity testing in late 2006 and ended up becoming Mark Skaife’s Holden Racing Team #2 race car for the opening four rounds of the 2007 V8 Supercars Championship Series, finishing on the podium at Barbagallo in Perth.

Initially it appeared in a unique #07 red, white and black livery during aero testing at Holden’s Lang Lang proving ground and the Woomera rocket range in South Australia before re-appearing in the famous HRT race colours.

Skaife, Todd Kelly and Nathan Pretty all drove the car during aero testing, while new 2007 endurance signing Glenn Seton sampled the chassis during testing at Winton early that season. Skaife was the only driver to race it during its time as an active race chassis at the HRT.

The car was later sold to Tony D’Alberto Racing and was driven by D’Alberto for his family-run team in The Bottle-O colours in 2008 and 2009, Centaur colours in 2010 and briefly in Wilson Security colours at the start of 2011 before the team moved to an FPR-sourced Falcon.

It was still run by TDR in 2011 though in the Fujitsu Series driven by David Wall and Dale Wood and was even driven at a team sponsor ride day that year at Eastern Creek by John Bowe – a unique piece of this ex-HRT Commodore’s history indeed!

Since then the car has not seen active racing duty and remains eligible for the Kumho Super3 Series, the third tier of Supercars racing.

See this car in its Bathurst 1000 race liveries in our recently released ‘Holden at Bathurst, The Cars’ book featuring a photo of every single Holden to ever compete in ‘The Great Race’ at Mount Panorama from 1963 to 2017.