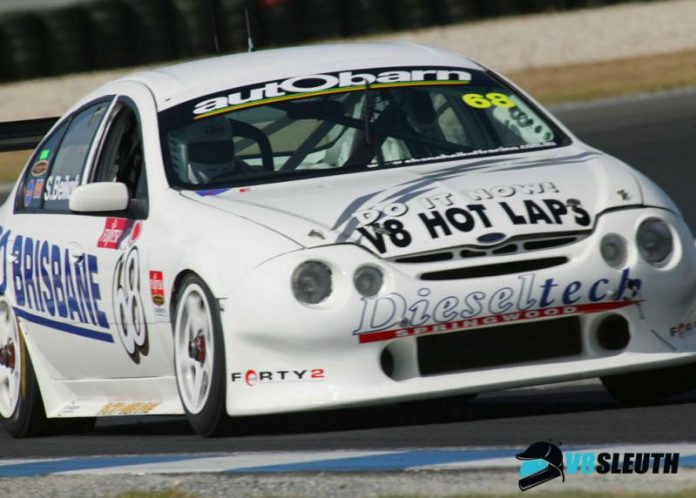 The Queenslanders have purchased the ex-Rod Lynch Motorsport Falcon AU that was originally built by Craig Harris’ team and raced in Castrol colours in Harris’ hands in the Konica Series back in 2002.

The father and son combination sold its existing Falcon AU (originally Rod Salmon’s Oneworld car) late last year however the car they have purchased is another they have history with.

Shane raced the car at Phillip Island’s final round of the Fujitsu Series in 2006 in a one-off arrangement after Jono had crashed the family team’s regular car at Bathurst in the penultimate round and it was unable to be fixed in time for the ‘Island.

To read all about the history of this Falcon and indeed all Falcon Supercars from 1992 to 2017, click here to buy a copy of our popular magazine ‘The Falcon Files’ documenting the history of 150 V8 Supercar Fords.

The team’s plan for this season is that the car will appear at two Queensland Raceway State meetings in April and May with the potential for some appearances in the Kumho Super3 Series as well.

The team also is available for lease-drive enquiries for the 2019 season at state or national level.

The Beikoffs have been winners in both the Super2 and Super3 Series having spent eight seasons alternating between driver and engineer roles in that time.

Beikoff Snr scored a race win at Wakefield Park in Super2 back in 2005 in the reverse grid race and won the Super3 (formerly Kumho V8 Touring Car Series) round at Oran Park in 2009, while son Jono finished on the podium in rounds of that same ’09 season.