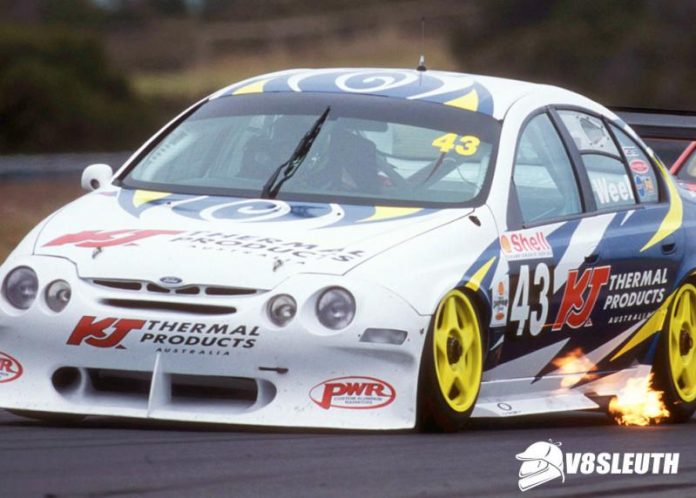 A FORMER K & J Thermal Products Falcon AU built and raced by Paul Weel Racing is the latest addition to the field for the Kumho Tyre V8 Sleuth Touring Car Classic at Winton on the Father’s Day, August 31-September 1 weekend.

The car’s owner, Queenslander Stephen Rushton, will be behind the wheel for the event, adding another entry to the ever-growing field for the inaugural Classic.

Rushton’s Falcon was built new in 2000 by Paul Weel’s team and driven by Weel himself as the #43 Falcon entry in that year’s championship through to the Queensland 500, where co-driver Greg Crick qualified it in the Shootout field.

Dean Canto and RPM International Racing acquired the car for Bathurst 2000 and raced it in 2001 before it later spent time in the Supercars Development Series.

Rushton purchased it in 2018 from its then-home in Western Australia and has returned it to a Weel K & J Thermal Products livery.

“Buying this car has been something of me going through my second childhood or a mid-life crisis – I’m not quite sure which one it is actually!” says Rushton.

“It’s an awesome old car, we’ve had a full CAMS audit on it recently and it’s all good and ready to come to Winton.

“I love the concept of the Sleuth Classic as a way of getting these cars back out on the track together. “

The ex-Weel AU Falcon will be eligible for the Glenn Seton Trophy, named in honour of the two-time Australian Touring Car Champion and to be contested by V8 Supercars from the pre-2003 ‘Project Blueprint’ era.

The event has also secured live streaming coverage on both the Saturday and Sunday as part of the Winton Shannons Nationals telecast that will also be viewable via the V8 Sleuth website and its social media channels.

The event format will mirror the Super3 Series with practice, qualifying and three races.