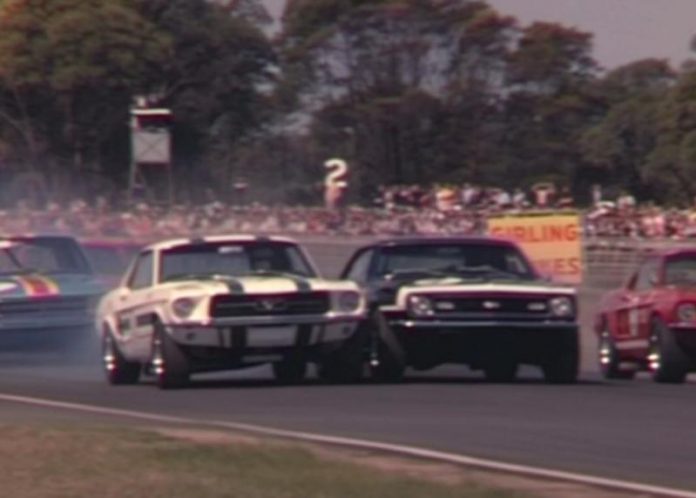 RARE colour footage of the 1968 Australian Touring Car Championship race is set to appear in a new documentary airing on FOX SPORTS in the run up to the Superloop Adelaide 500.

Ford Mustang Supercar: An Even Faster Horse, premiering on FOX SPORTS 506 on Tuesday night at 8:30pm AEDT, goes behind the scenes of the Ford Mustang’s journey from the drawing board to the 2019 Supercars Championship grid.

Mustang’s return adds a new chapter to the model’s rich history in the championship, winning multiple titles in the 1960s in the hands of legends like Norm Beechey and Ian ‘Pete’ Geoghegan.

Geoghegan claimed four of his five championships aboard Mustangs, including the 1968 title, the last to be determined by a single race.

Motorsport enthusiast Bill Pearson was trackside at Sydney’s Warwick Farm circuit that day, and the footage he captured has been supplied, via V8 Sleuth, to documentary producers AirTime Media.

The Supercars-spec Mustang makes its racing debut next weekend in Adelaide, marking the end of a long development process by DJR Team Penske, Ford Performance and Ford’s Asia-Pacific Design Studio.

The production team was granted unparalleled access by both Ford and the team to document the design and build of the new machine, including interviews with all the key players and exclusive footage from the day the Mustang first hit the racetrack.

Along with its Tuesday premiere, Ford Mustang Supercar: An Even Faster Horse will be replayed across the Superloop Adelaide 500 weekend.