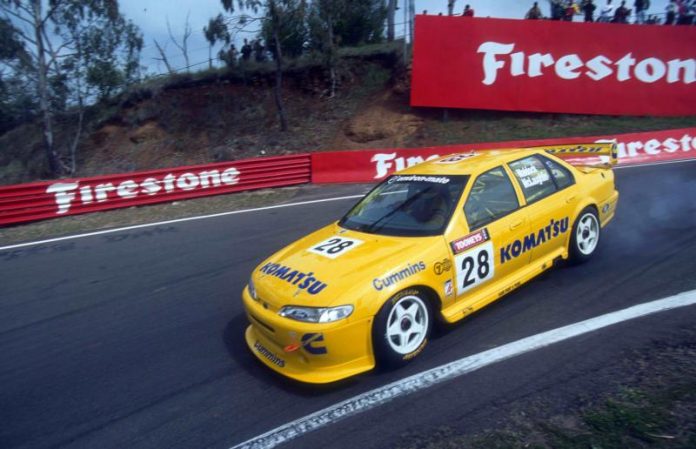 ONE of the controversial Ford Falcon V8 five-litre touring cars built from a lightweight body shell in the mid 1990s is now on the market.

The Falcon EF originally built by Queensland privateer Kevin Waldock’s Playscape Racing team has spent recent years in the hands of the Assaillit family and is on the market looking for a new owner.

The ideal car for the growing Australian Five-Litre Touring Car Association, it features a range of spares and would make be a smart purchase for a collector with an eye to the future and potential Historic classification for these cars.

Built new in 1995 and debuted by Kevin Waldock and Mark McLaughlin at the Sandown 500 that year, the #28 Komatsu Falcon then finished in the top 10 at Bathurst.

It was also unique in that it was built using one of the Ford-produced ‘lightweight body shells’, which was a major controversy of the ’95 V8 racing season after it was discovered that Ford had been building its race cars with lighter gauge steel and lighter panels.

Waldock retained the car in 1996 and appeared in the Australian Touring Car Championship infrequently, only competing in the Barbagallo and Mallala rounds later in the season in addition to running the non-championship Gold Coast event.

He ran the car at Bathurst with Wayne Park as co-driver, though a wheel popped off at one stage! In the lead-up to Bathurst, Waldock had launched an ambitious bid to snare IndyCar legend Mario Andretti as his co-driver for The Great Race, an offer the American legend politely turned down …

The car was inactive for most of 1997 save for two appearances in the AMSCAR Series and only appeared in a V8 Supercar event once at October’s Primus 1000 Classic at Bathurst with Waldock and John Smith driving.

For 1998 the car again only ran at Bathurst, though by now under the CBS Mining Racing Team banner, and Waldock entered it for the FAI 1000 Classic at Bathurst with Mark McLaughlin.

However Waldock was ruled out from driving due to heart issues (he was due to undergo open heart surgery the next week!), so the late Kiwi Ashley Stichbury was hurriedly flown over to Australia, arriving on the Friday afternoon and having his first-ever laps of Bathurst!

After being retained by Waldock for quite some time and advertised for sale for quite some years, it was purchased by David Thexton in 2003 to run as a Sports Sedan as he tried to build up his experience in V8 Supercars.

It then passed through the hands of Rod Dawson (2004) before being secured by the Assaillit family in 2006.

Damien Assaillit – who you may remember from competing in the Dunlop Series in recent years – drove the car in 2006 to gain experience prior to entering the Fujitsu Series and in 2007/08 he used it in between development series rounds to gain extra seat time.

Brother Nathan had his first race in the car in 2008 and then the pair drove the car in 2009. Nathan ran it in QLD Sports Sedans in 2010 and finished second in the Queensland Racing Drivers Championship in 2011.

The car has also appeared in the Kumho V8 Touring Car Series in recent times – it remains eligible for that series and also fits the model eligibility required for the Australian Five-Litre Touring Car Association.