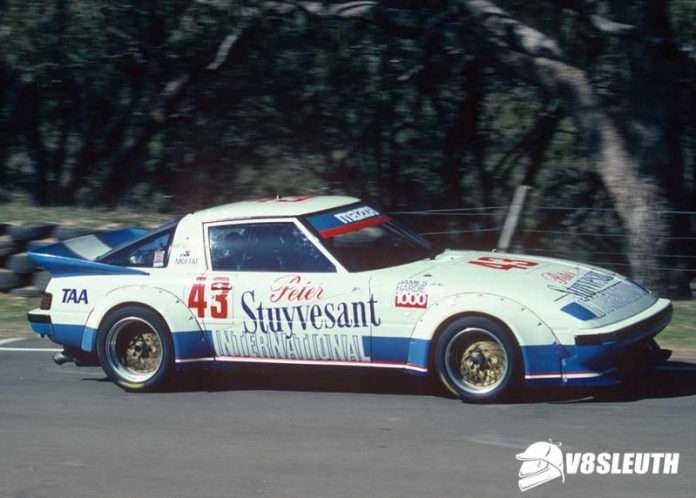 ALLAN Moffat’s long campaign to be allowed to race the Mazda RX7 in Australian touring car racing finally began to bear fruit in 1982.

Just not at Mount Panorama.

After a quiet debut in late 1981 that still netted he and Derek Bell a podium finish in the Bathurst 1000, Moffat embarked on his first full-season campaign with the rotary-powered rocket in 1982.

A podium in the opening race at Sandown after a race-long battle with Kevin Bartlett’s Chevrolet Camaro showed what was to come, Moffat taking the Mazda’s maiden win at Lakeside before rounding out the championship with another in the season finale at Surfers Paradise.

The bespectacled Canadian-born racer stirred up more controversy at the Castrol 400, earning two pit lane speeding penalties – long before such things were commonplace – which led to being black-flagged and not acknowledged as the winner, Moffat playing to the crowd’s jeers by parking in front of Sandown’s grandstand and bowing to the spectators.

A subsequent appeal would instate him as the race winner, but the ill-feeling lingered ahead of the Bathurst 1000.

While Moffat and co-driver Yoshimi Katayama were touted as potential winners, the long drag up Mount Panorama cancelled out the lightweight car’s better handling, tyre and fuel consumption against the dominant Holdens and Fords.

Moffat made the Hardie’s Heroes shootout with a stunning time that was good enough for third in qualifying, just a second shy of Allan Grice’s provisional pole time. However he could only muster the eighth-fastest time in the Top 10 Shootout to secure a spot on the fourth row of the grid for race day.

While the Commodores of Peter Brock and polesitter Grice shot away at the front of the pack, Moffat was hobbled in the early stages as crews cleaned up a multi-car crash at the Cutting, the slow pace threading past the tow trucks and the rotary’s lack of punch up the steep grade costing him ground to the big-torque V8s ahead of him.

The blows kept coming: pre-race chatter suggested the Peter Stuyvesant Mazda could do the race on one less pit stop than the V8s, but Moffat’s first stop only came a handful of laps later than Brock’s.

The final nail was struck at the end of Katayama’s stint, the RX7 arriving in the pits with no front brakes. The plan had been to try and do the 163-lap distance without a brake pad change due to new front calipers that made it tricky to do quickly; the resulting stop cost the little Mazda 13 minutes while the brakes were bled and new pads fitted.

A sixth place at the chequered flag, seven laps down on race-winners Brock and Larry Perkins, was not the triumph Moffat hoped for, but the lessons learnt at Bathurst in 1982 paved the way for better days ahead for his white and blue Mazdas.

Click here to pre-order the 1:18 scale model of the Moffat/Katayama Mazda RX-7 from the 1982 James Hardie 1000 from Biante Model Cars.