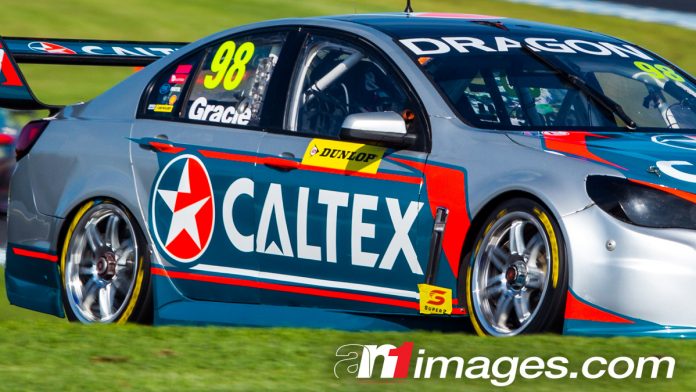 THE last Supercar raced by Renee Gracie has been sold to an overseas buyer.

Englishman Alex Sidwell, who owns and races a range of other V8 Supercars in the UK, is the purchaser of the VF Commodore that was originally built by Garry Rogers Motorsport in 2013 and driven by Frenchman Alex Premat in that year’s V8 Supercars Championship.

Gracie raced the car in Caltex colours under the Dragon Motor Racing banner and run by Image Racing in the second-tier Dunlop Super2 Series in 2017.

The now 26-year-old drove it in the first five rounds of that year’s series – her last start in the car at Sydney Motorsport Park in August 2017 also proved to be her last appearance in Supercars.

She has since moved into selling online adult entertainment content.

Her last Supercar is the sister car to the ex-Scott McLaughlin chassis that Sidwell and his Holden Racing UK team purchased last year. Both cars were sourced from the defunct Dragon Motor Racing team.

Sidwell has run under the Holden Racing UK banner however registered the business name ‘Holden Racing Team Ltd’ in the United Kingdom last year and will run his cars under that banner in the future.

The team’s new acquisition is GRM 15, the second Car of the Future-spec Commodore VF built by Garry Rogers Motorsport.

It was raced by Premat in 2013 and was leased by Lucas Dumbrell Motorsport for a handful of rounds in 2014 in the wake of the team’s regular car being damaged at Bathurst.

The chassis was leased by Novocastrian Motorsport and entered at Bathurst as a wildcard in 2015, finishing 17th in the hands of Aaren and Drew Russell.

Richard Muscat drove it in the 2016 Super2 Series for GRM and it was raced under the Dragon banner by Renee Gracie and Jordan Boys in 2017.

Its last appearance in Supercars was in Boys’ hands in Newcastle in 2017.