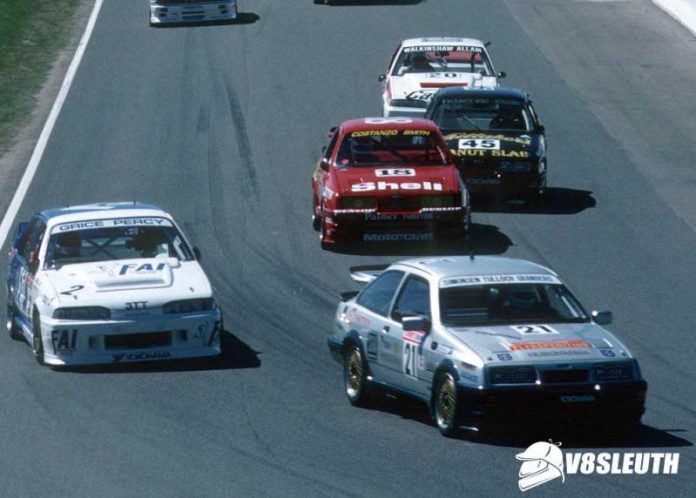 The silver Swedish Sierra has undergone a full restoration …

A SWEDISH-built Ford Sierra Cosworth RS500 that tackled the Bathurst 1000 has popped up for sale in England.

The Team CMS Sierra was a late entry for the 1988 Tooheys 1000, the car built in the middle of that year by Swedish father-son duo Kurt and Christer Simonsen from a kit purchased from Andy Rouse.

The Simonsens raced the car in the closing rounds of the European Touring Car Championship at Silverstone and Nogaro before air-freighting the car to Australia, the silver and dark blue machine arriving at Mount Panorama a day after practice began for the younger Simonsen, Volvo star Ulf Granberg and Kiwi racer Inky Tulloch to drive.

Granberg qualified the car 10th fastest, making it eligible to run in that year’s 12-car ‘Tooheys Dozen’ Shootout which didn’t count for grid positions. Unfortunately, the car made it only six laps into the race before the turbocharger expired.

Pictures of this Sierra and every other Ford that competed in the Bathurst 1000 can be found in our limited edition book Ford At Bathurst, The Cars: 1963-2018, the ultimate photographic history of the ‘blue oval’ at the Mount Panorama enduro.

Along with its brief Bathurst appearance, the car tackled that year’s Nissan Mobil 500 races on the Wellington street circuit and at Pukekohe before returning home to Scandinavia, the Simonsens racing the car in domestic events.

The car returned to Asia a couple of years later, racing in Macau’s Guia Trophy race and the Inter-tec 500 at Fuji Speedway in Japan.

The Sierra has since undergone a full restoration, and is offered with two brand new Mountune race engines and a large number of brand new BBS split rim wheels.

Click HERE to head to Duncan Hamilton ROFGO to see the car’s listing.