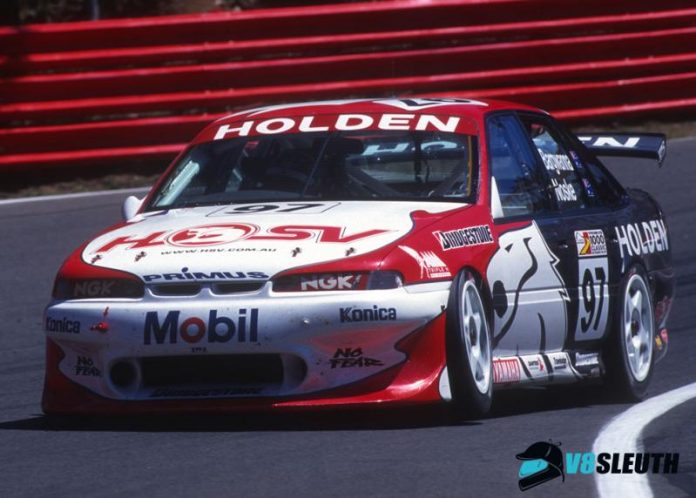 AS far as Bathurst memories go, the accident that stopped their 1997 Bathurst challenge before it really started is still one that is mentioned in relation to Jason Bargwanna and Mark Noske despite all of their career achievements.

The promising youngsters were selected along with Todd Kelly and Stephen White in 1997 as part of the ‘Holden Young Lions’ driver development program created to help foster the growth of the next wave of young drivers.

Speaking of the Young Lions, pre-order our HRT Cars History book here and you can read all about the history of their 1997 Commodore – and every other HRT race car – in our limited edition, 400 page special hardcover book out soon.

The Holden Racing Team had already seen the benefits and speed of the likes of Craig Lowndes and Greg Murphy and wanted to have first pick at the next crop of fast racers that would follow in their wheel tracks.

The brainchild of HSV boss John Crennan, the program saw Noske debut the special-livery, red, white and black #97 Commodore in the non-championship Albert Park event before White was given the nod to compete in the final two rounds of the Australian Touring Car Championship at Mallala and Oran Park.

Bargwanna, who had spent the season fighting for the Formula Holden crown with Jason Bright, was then selected to join Noske for the end of season endurance races at Sandown and Bathurst.

Their car was the third run by HRT in addition to the #05 car of the retiring Peter Brock and new team signing Mark Skaife, while Greg Murphy was joined in #15 by Craig Lowndes, fresh back from a largely unsuccessful season in International Formula 3000 racing.

The Young Lions performed well in the warm-up Tickford 500 at Sandown by finishing ninth and ‘The Pram’ – the nickname given to their car by HRT mechanics given the young age of its pilots – was ready for the Primus 1000 Classic at Bathurst on October 19.

As much of the attention was on the retiring Brock and his farewell to the thousands of fans that descended upon Mount Panorama, 25-year-old Bargwanna and 22-year-old Noske were able to carefully go about their business in the background.

It was Bargwanna who staked his claim to being lead driver among the two open wheeler stars though, by clocking the fifth fastest time in Thursday practice among the big stars of V8 Supercar racing.

But that was nothing compared to what Bargwanna mustered on Friday.

After being near the front all day in the practice and early qualifying sessions, the 1997 Gold Star runner-up slammed the #97 VS Commodore around the Mountain in 2m10.92s to be faster than any other car.

It was faster than Skaife could muster in the famous #05, better than reigning Bathurst champ Murphy could do in the #15 car and had the field covered.

It sent the HRT garage into rapturous applause and meant Bargwanna would be the final car against the clock in the Saturday morning Top 10 Shootout.

But the Young Lion would have to watch Skaife clock a 2m10.04s to steal pole, Bargwanna content with a 2m11.09s to put him fifth on the grid.

And then came the Sunday morning final warm-up session, a final systems check and a chance to make sure all was well with the 41 cars that would take the start.

After lapping carefully in the 2m17s bracket, Bargwanna went missing late in the session. The young gun had tagged the wall entering Forrest’s Elbow, the wall grabbed the tyre and ripped the wheel from his hands and the car slewed across the road and fired head-on into the concrete wall on the outside of the track.

The sickening shunt launched the car up into the air, all four wheels off the bitumen. It bounced back to earth and came to rest on the left hand side of Conrod Straight, heavily damaged and out of the race.

Bargwanna and Noske were forced to watch as their fifth grid position was left vacant and the day turned to rubble for HRT as their other two cars retired before the second round of pit stops.

It was a disastrous day for the two youngsters and a mistake Bargwanna would be reminded about for years, even despite his win with Garth Tander in 2000.

Ironically though, he and Noske would link up again some 12 years later in the Sprint Gas team at Bathurst, finishing sixth after contending for a podium finish late in the race.