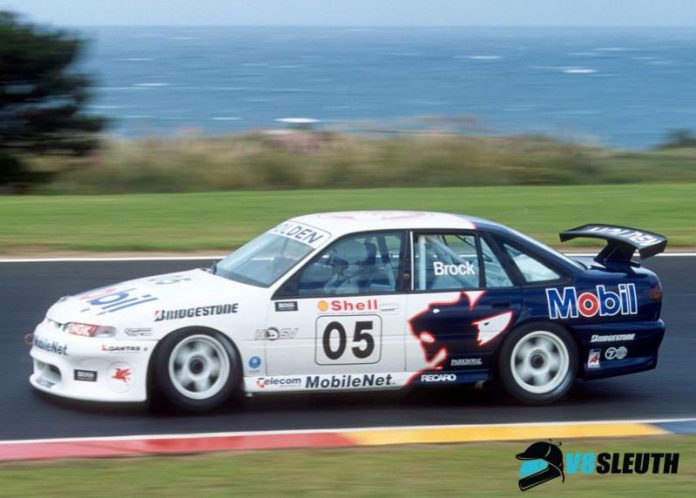 He’s become a V8 Supercar legend, but Greg Murphy was a very nervous man when he first drove a HRT car – none other than the famous #05!

GREG Murphy became a legend of V8 Supercar racing, largely due to his four wins in the Bathurst 1000 and his four round wins on home soil at Pukekohe in New Zealand.

In V8 Sleuth’s new book covering the history of every Holden Racing Team race car – pre order now here and don’t miss out, delivery is expected in August – the Kiwi recalls the story of his first test of a V8.

And it was in none other than the famous #05 Mobil Commodore of his hero Peter Brock – and he very nearly shunted it on his first test day with the team in mid-1995 at Calder.

“It was horrendously wet, a typical Calder day in May,” recalls Murphy of his drive in Brock’s Commodore nicknamed ‘Beth’ by HRT and driven by the Aussie racing legend during 1994 and 1995.

“I arrived down from Sydney where I was living, and got in the rental car and thought it was going to be a waste of the day and their time because there was no way we would be running.

“But the truck was there, the tent was up and there was #05 sitting under the tent with Brock’s name on the window. After a few intros they said to get my suit on and head out – ‘holy shit’! I had never driven a V8 before and it was pissing with rain!

“I came onto the main straight at Calder and they forgot to warn me about the VHT drag racing compound and I dabbed the throttle and it turned hard right towards the wall and it was only by the grace of something it didn’t go crunching into the fence.

“That was my first lap in a Group A touring car, with my hero’s number and name on the side of it.”

The full history of the car Murphy first tested – HRT 030 – is included in V8 Sleuth’s upcoming release 400-page limited edition book covering the racing histories of each and every one of the team’s cars.

Pre-order it here from the V8 Sleuth Online Store and don’t miss out – there are only 1000 copies available – all come with a numbered certificate.