Home News REWIND: The Bathurst Win That Got Away 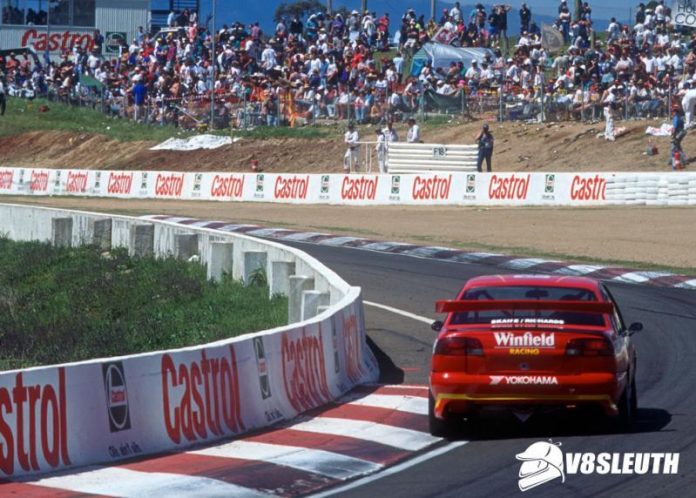 History shows the Castrol team won Bathurst in 1995, but for the first part of the race it looked like a different Holden was going to romp it in …

MARK Skaife and Jim Richards’ assault on the 1995 Tooheys 1000 at Bathurst was perhaps best described as ‘the one that got away’.

The Gibson Motorsport team’s season had been a tough one leading up to Bathurst, as Skaife was seriously injured in a practice crash at Eastern Creek at the start of the season and forced to miss the opening Australian Touring Car Championship round at Sandown.

Richards crashed in practice for the ATCC round at Bathurst and was outed for the weekend as he and Skaife struggled throughout the sprint season, the team’s Yokohama tyres simply unable to compete with their Dunlop and Bridgestone-mounted rivals.

But Skaife did win the round at Eastern Creek and as the team headed to Bathurst in October they were every inch a chance.

In the final year of tobacco sponsorship in Australian motor racing, the team would save farewell to the Rothmans company and its Winfield brand at Bathurst and they were a factor for The Great Race right throughout the course of the weekend.

Skaife qualified the #1 VR Commodore second fastest in the Top 10 Shootout on Saturday morning, beaten to pole position by the man who would later be his team-mate at HRT – Craig Lowndes.

Come race morning and the team sprung something of a surprise on their rivals as Richards was behind the wheel to start the race. Many had assumed Skaife would line-up to start the 1000-kilometre event, but the expat Kiwi was more than up to the job despite a bad season on the score sheet.

Richards and Lowndes were beaten from the front row of the grid by Wayne Gardner’s Coke Commodore. Richards settled into a comfortable second place and took just six laps to work his way into the lead.

From there the #1 Holden eased away from the former world motorcycle champion. The margin was out to six seconds by lap 20 and Richards looked to be in total of control of the race, especially given that the two HRT Commodores would fall victim to engine problems before the first round of pit stops.

Added to that, Larry Perkins had clashed with Lowndes on the run to the first corner of the race and popped a tyre, so the Castrol Commodore was well back in the order and fighting to stay on the lead lap.

The leading group all started to make their first stops on laps 32 and 33, but amazingly the lead car stayed out.

Such was the superior fuel economy of the Skaife/Richards car it would not pit for fuel until lap 38, meaning that they were within a few Safety Car laps of being able to do the race on just three pit stops – a sizeable advantage.

Skaife emerged from pit lane with nearly half a minute back to Dick Johnson and he had Perkins’ co driver Russell Ingall (desperately trying to get back on the lead lap) formed up behind him when the first Safety Car came out on lap 47.

When the race restarted, Skaife simply blazed away from the field. But on lap 64 he limped to the pits. The tailshaft had snapped, breaking the back of the gearbox and punching a hole in the floor.

They were out – and Larry Perkins was therefore back on the lead lap. History would show that he and Ingall would go on to a famous victory.

But Bathurst 1995 was the one that got away for Richards and Skaife. Their 1995 Bathurst mount would later become a Wynn’s Commodore and eventually find its way to racing in England – but that is indeed another story for another time with the V8 Sleuth …