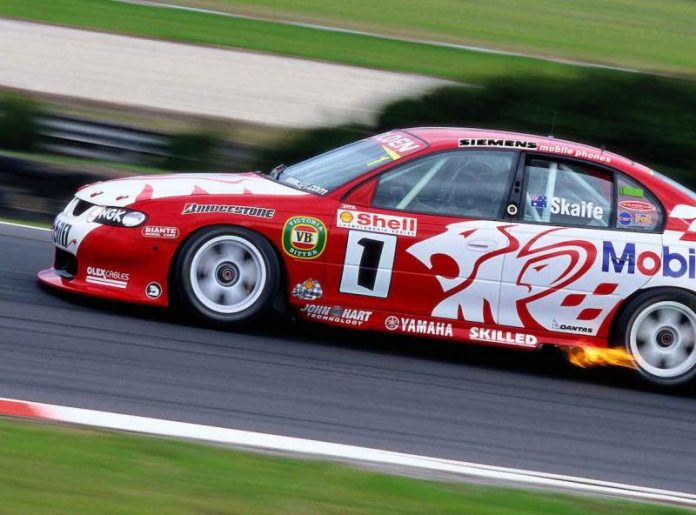 The 2001 Holden Racing Team Commodore VX was successful on the track, but its designer copped plenty of grief about how it looked …

THE V8 Sleuth’s upcoming book on the histories of every single race car to don the Holden Racing Team warpaint is in the final stages of production before printing and within its pages are plenty of stories about the various cars, their racing histories and achievements on the track.

To make sure you don’t miss out on this limited edition, 400 page hardcover special book, pre-order here now via the V8 Sleuth website.

In addition to the cars, we’ve also delved in the book into the thoughts of the designers that penned the various liveries these iconic race cars have carried over the years.

As many V8 Sleuth readers will remember, the Holden Racing Team’s Commodores in 2001 were extremely dominant. Mark Skaife claimed the championship – his second in a row with the team – and won the V8 Supercar 1000 at Bathurst with co-driver Tony Longhurst, while new teammate Jason Bright finished third in the championship.

The livery of their HRT Commodores that year were designed by Holden Design’s Warrack Leach, who introduced chequers to the rear panels for the new season. But it was his cropping of the Holden lion on the bonnet that was mega controversial within Holden at the time.

“The corporate affairs leadership was not happy about it, the Director describing it as ‘looking like a parrot’,” he recalls in the upcoming book.

“Fortunately for the parrot, John Elsworth got behind it and it got over the line.

“The hood layout provided me with a valuable lesson in understanding Mike’s (Simcoe) design direction technique. When reviewing the mocked-up livery he casually mentioned that he thought the front looked unbalanced and including part of the lion badge ring in the top right corner of the hood would solve this issue.

“Being part green and part inattentive, I took this as an opinion and one that I didn’t agree with so just left it as it was. I did have some explaining to do on the Monday after the car’s first race.

“It is worth noting that the 2002 car includes the ring!”

Leach also designed the ’02 livery – which was only a very subtle update of 2001 – and that year’s car also won the championship and Bathurst with Skaife.

In fact, it was also the last HRT livery he designed, meaning he ended his time crafting HRT liveries with a 100% winning record in terms of both the V8 Supercar Championship and Bathurst 1000!