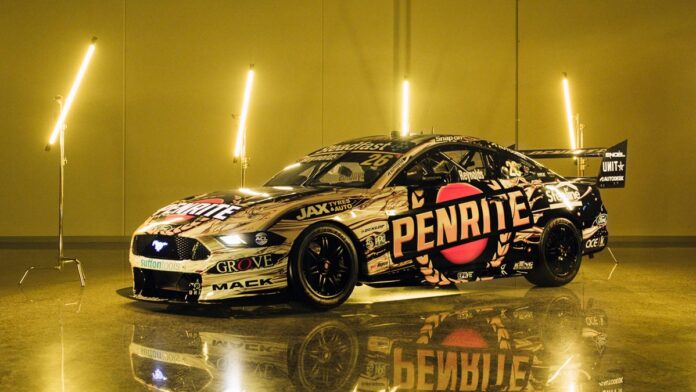 KELLY Grove Racing has revealed a stunning gold livery for David Reynolds’ Ford Mustang ahead of the return of the Repco Supercars Championship this weekend.

While the car will sport the new colours for all four Sydney Motorsport Park events, the Penrite Oil livery has clearly been applied with the night races in mind.

ENTRY LIST: How the 2022 Supercars grid is taking shape

It features electroluminescence vinyl which the team says will illuminate the Penrite branding on both the bonnet and rear bumper.

The look is completed by yellow lighting in and under the car.

Five of the upcoming 11 races at SMP will be held at night, starting with the championship’s return race this Saturday.

“It’s great to finally be back on track,” said Jarrod Harding, Penrite Director of Motorsport.

“We’ve got something really special here with the new car lighting and I can’t wait for everyone to finally see it.

“As an oil company it’s also great to do a livery design that emphasises who we are and what we do. Seeing it under lights this weekend is going to be fantastic!”

Reynolds heads to this weekend’s Sydney SuperSprint 15th in the championship with his best race result a third-place finish at Sandown in March.