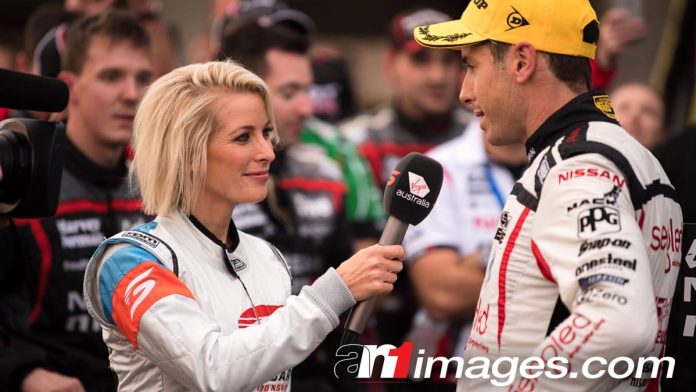 RIANA Crehan has opened up on her exit from Supercars’ television line-up, and explained why she’s relaxed about having no immediate plans for 2021.

Crehan announced the news last week on social media and joined host Aaron Noonan for this week’s episode of the V8 Sleuth Podcast powered by Timken.

She had been in the Supercars TV system since 2007, initially as a big screen presenter at events before transitioning to the television broadcasts themselves, mainly working in pitlane.

Crehan’s departure is among a number of expected changes for next year, when Seven takes over from Network Ten as the championship’s free-to-air broadcaster.

Asked if she ‘jumped’ or was ‘pushed’ from the role, Crehan told the V8 Sleuth Podcast: “My contract had ended at the end of this year.

“I don’t think I’m speaking out of school, but I think most of the TV talent were out of contract at the end of this year because the network was changing.

“I was always going to be out of contract regardless whether I continued or not, so it was just a case of not renewing the contract. Simple as that.”

When asked whether the reasoning behind the move had been explained, she added: “Any time there’s a network change they’ll look to see change [in the line-up].

“All the different networks are going to have their own view of what they want to see. It happened when Ten came in six years ago, they wanted to change the line-up…

“I certainly didn’t sit there thinking I was a guaranteed starter for next year. There are no conspiracy theories. This is television. No-one’s guaranteed a seat.”

She also laughed off one theory behind her exit that had emerged on social media.

“I saw some comments on Facebook saying, ‘good luck with the birth…’. No, I am not having a baby! So, let’s just put that one to bed right here, right now!” she said.

Crehan had been in and out of the broadcasts this year due to cutbacks brought about by the COVID-19 pandemic.

The economic fallout of the pandemic also cost husband Will Davison his full-time Supercars seat in May.

“This year has been really tough. The toughest year of my life,” said an emotional Crehan, whose father passed away in July.

“That’s probably made me re-evaluate the way I see things. I don’t feel like I need to jump into something [else] just yet.

“I had a really hard year and I probably just need to take some time to get myself right before I get myself into [any new roles].”

In the V8 Sleuth Podcast, Crehan explains her journey from Miss V8 Supercars winner to TV talent, the challenge of being a woman in pitlane, her most satisfying and toughest on-air moments, and much more.