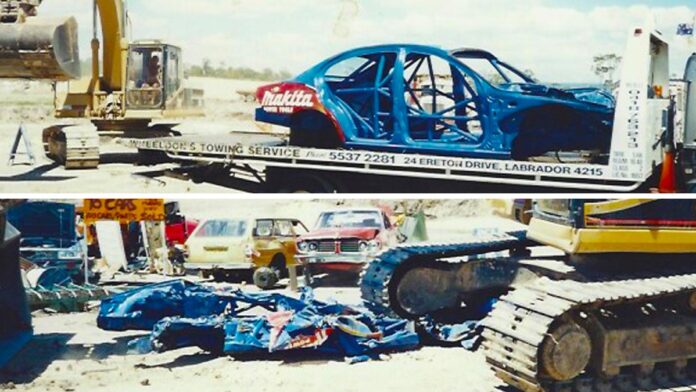 THE latest story in our series of RIP Racers features the other car that was destroyed in the monumental start line accident at Oran Park in 2000 – Mark Larkham’s first Mitre 10 AU Falcon.

This Falcon was the first AU built by Stone Brothers Racing in 1999 and was given the designation M-TEK 02 by Larkham’s squad, which was run by SBR at the time.

Larkham gave the now-destroyed car its race debut at Albert Park in 1999, its Thursday practice run in fact its very first time turning a wheel in anger!

The Mitre 10 car ran throughout the 1999 season in Larkham’s hands with Audi Super Touring ace Brad Jones joining him for the endurance races – and it was at Bathurst that things really came together for the Mitre 10 crew.

Larkham set a blistering 2m09.5146s lap of Mount Panorama in the Top 10 Shootout to claim pole position for the FAI 1000, a new qualifying record and the first V8 Supercar pole position of his career.

Unfortunately the car suffered clutch problems on Sunday that took the pair out of The Great Race.

The Mitre 10 team retained M-TEK 02 for the 2000 Shell Championship Series, Larkham electing to go it alone and separate from the Stone Brothers and run his own team under the ‘Larkham Motorsport’ banner.

He drove this car again through the first part of 2000 with improved results and cracked his first championship podium finish in July’s Queensland Raceway sprint round behind the HRT Commodores of Craig Lowndes and Mark Skaife.

Interestingly, Larkham’s Falcon was also used as a test bed by TEGA (the Touring car Entrants Group of Australia), running traction control at a Queensland Raceway test to investigate and log tell-tale signs of traction control in the MoTec system that would help officials recognise it if it was illegally being used in the category.

Sadly the Falcon was destroyed only a couple of rounds later at Oran Park when it ploughed into the back of Paul Morris’ stationary Big Kev Commodore at the start of the third race – read about the life story of that car in our previous RIP Racers story here.

Watch the unforgettable accident in the video here:

Following the Oran Park accident the smashed Larkham Falcon was sent to the scrap yard to be crushed with salvageable running gear saved for the replacement M-TEK 03 car that made a winning debut at Calder a few weeks later.