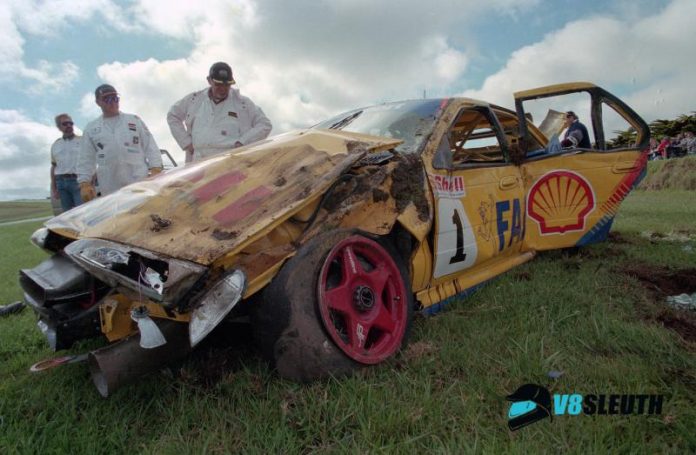 Is this Australia’s most significant lost race car?

R.I.P Racers is our new series of articles that looks at some of the legendary Aussie racing machinery that was destroyed in action.

Today we’re looking at the Dick Johnson Racing chassis EB5, a very special car that not only took Dick Johnson and John Bowe to victory in the 1994 Tooheys 1000, but also won the 1995 Australian Touring Car Championship with Bowe at the wheel.

DJR EB5 was built new as an EB II Falcon and debuted by Bowe at the Shell Australian Touring Car Championship round at Eastern Creek in 1994 racing as #18.

The Falcon was rested for the Sandown 500 and saved up for Bathurst in 94, where racing as #17, Johnson and Bowe took DJR’s third victory at Mount Panorama.

The Shell-FAI Falcon started from 10th on the grid after Johnson slapped the wall on the exit of the Cutting in the Top 10 Shootout and folded the right rear guard onto the tyre, smoking his way around the remainder of the lap.

Bowe started the race in the wet and slowly worked himself into the day.

As the weather dried, the DJR Falcon came into the game, working its way into the lead at half-race distance and going within 10 seconds of putting the Brad Jones/Craig Lowndes HRT Commodore, down a lap.

By the time the final pit stops unfolded, Bowe had taken over from Johnson and HRT put Lowndes aboard the Commodore for the run to the chequered flag. The race was on!

In one of the more famous passing moves in Bathurst history, Lowndes missed his braking point and amazingly ran around the outside of leader Bowe at Griffin’s Bend.

But Bowe had the pace and the nerve to get back in front and drove away to victory, 5.7 seconds clear of Lowndes in second.

Were you at Bathurst in 1994? Share your memories of this momentous Ford win on our Facebook page here.

After its Bathurst success, the chassis was updated to EF specification for 1995 and was again run by Bowe as the #18.

This chassis became Bowe’s #1 car for his title defence in 1996.

It started the year looking as if it would be the only driver and car combination capable of giving Lowndes and HRT a run for their money.

Bowe won the Bathurst sprint round for the second year in a row and had finished on the podium at Symmons Plains before it all went wrong at Phillip Island, when both Bowe and Lowndes ran off the road on the opening lap of Race 2.

DJR EB5 came to rest on its side, severely damaged.

“At one stage everything went quiet and I put my hand on the seatbelt because I thought it had stopped,” Bowe recalls of the crash.

“And then it hit the ground again! I reckon I was half a second away from actually killing myself because had I let the buckle be unclipped, I would have been loose inside the car.

“When it stopped it was on its side and I let the belts go then. I couldn’t open the door so I started to get a bit worried. A guy jumped over the fence and opened the door and got me out.”

The team returned to the workshop with the heavily damaged car, however on closer inspection it was decided that the shell was beyond repair.

Still-useable internal components were stripped and the destroyed body shell scrapped and taken to the tip.

Sadly the Phillip Island crash was a tragic end for a Bathurst 1000 and Australian Touring Car Championship-winning chassis, a car that still holds a special place in the hearts of Ford fans everywhere.

If you enjoyed the history of this DJR chassis you can read more on the history of every Falcon from the 5 Litre V8 and Supercars era in the V8 Sleuth’s comprehensive book ‘The Falcon Files’. Order your copy here.