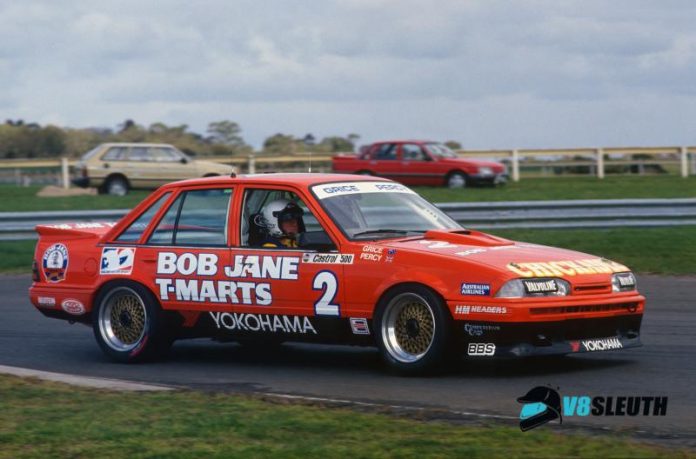 The first VL Commodore to race in Australia is gone, but not forgotten!

AUSSIE race fans love to reflect on the golden days of racing and the iconic cars of the period are still revered and celebrated.

Even in the modern world of Supercars, the rare sighting, display or demonstration of classic race cars bearing names of the likes of Moffat, Brock or Johnson produces crowds of adoring fans.

But what about the cars that didn’t survive?

Many of our favorites from back in the day were lost to the rigors of the track. Smashed, bashed and destroyed, these once great racecars were stripped of their parts and the remnants sent to the tip.

At V8 Sleuth our charter is to preserve the history of Australian motor racing. Regardless of whether a racecar survives to this day or not, we’re always proud to tell its story.

In a new series of articles titled ‘R.I.P Racers’ we’ll take a closer look at some of the cars that are no longer with us, reflecting on what they achieved on track and how they met their end.

We’ll start with arguably one of the prettiest VL Commodores of the Group A era – the 1987 Grice/Percy Bob Jane T-Marts example.

Allan Grice debuted the brand new Les Small-built Roadways VL Commodore at the Lakeside round of the Australian Touring Car Championship in April 1987.

This car was the first VL model Commodore to race in Australia, and only missed being the first in the world by a matter of weeks, beaten by the Moffat/Harvey Rothmans VL at the Monza round of the World Touring Car Championship in March.

In 1987 being the first locally raced VL was an important point. Holden had split with Brock earlier in the year and was looking for a new local hero.

Holden rival Larry Perkins had opted to stay in his tried and tested Enzed VK Commodore for ’87, leaving Grice to fly the flag in the General’s latest model product.

The two-time Bathurst champ debuted the VL in a white livery with yellow and blue Bob Jane T-Marts graphics.

The VL had plenty of power as Small’s Roadways organisation had done a good portion of Holden’s engine development however tyres were a problem.

The team initially opted to run on Yokohama’s 1986-spec crossplies, which were the gun option in ’86, but well off the pace in ’87.

Results for the car in the ATCC were mixed with a third place at Adelaide the highlight.

Grice was joined for the enduros by popular Englishman Win Percy and led the early stages of the Sandown 500 before retiring with engine issues.

Percy heavily damaged the car in a Friday practice crash at Bathurst, hitting the wall at McPhillamy Park head on at a reported 160km/h.

The car was rebuilt overnight and took its place in Saturday’s Hardies Heroes, claiming seventh position on the grid and fastest Commodore – despite the accident.

Rear axle issues forced the car out the race as it ran in contention near the head of the field in the only Bathurst 1000 it competed in.

To relive the Grice/Percy VL’s 1987 Bathurst race you can order the DVD of the full race telecast from the V8 Sleuth Online Store here.

For 1988 Grice divided his time between racing for the Nissan Motorsport Europe team in the European Touring Car Championship and running NASCAR for Bob Jane, both locally and in the United States.

Without a touring car program, Les Small’s Roadways team converted the orange VL into an AUSCAR and competed in the highly popular Aussie alternative to NASCAR run at Melbourne’s Calder Park Thunderdome.

History doesn’t record where and when, but the once VL Group A touring car turned-AUSCAR met its end against the wall at the Thunderdome and was deemed too badly damaged to repair.

Were you there the day the Roadways VL was destroyed? Do you know more about the year it occurred or have any other insight?

Send us an email here or follow us on our Facebook page here and get in touch if you have more information on this car or want to suggest any other cars for future installments of ‘R.I.P. Racers’.