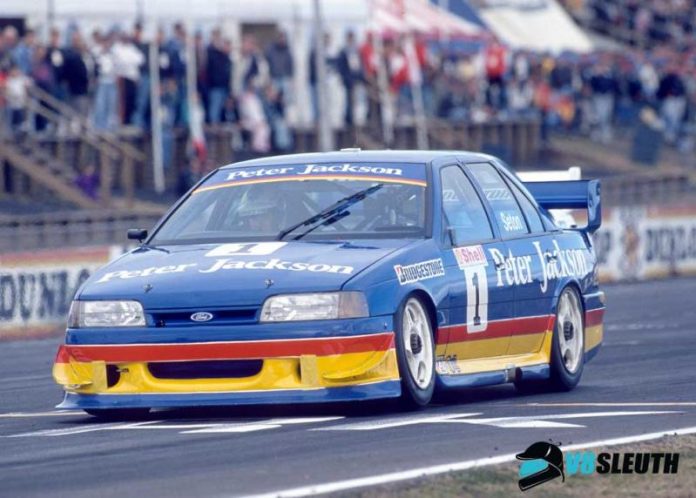 The real car may have been destroyed but at least now you can own a model of it!

SADLY there are a range of race cars from Australian motorsport history that have been destroyed and are gone forever – Glenn Seton’s 1994 #1 Peter Jackson Racing Falcon EB is one of them.

But while the real car may have gone to ‘car heaven’, our mates at Biante Model Cars have released a 1:18 scale model of Seton’s 1994 Australian Touring Car Championship runner-up Falcon EB, and you can order it now here via the V8 Sleuth Online Store.

But what was the story with the real car?

This particular car was in fact the fourth racing Falcon built by Seton’s team – you can read the history of it and every other Falcon Supercar built in our 240 page publication ‘The Falcon Files’ available for purchase here in the V8 Sleuth Online Store!

This chassis was debuted by Glenn Seton at the final round of the 1993 Australian Touring Car Championship at Oran Park after Drew Price’s testing crash at Phillip Island had destroyed GSR2.

Reports of the period indicated that this new car had in fact been built using the salvageable running gear from the written-off GSR2, including the engine and gearbox (rebuilt).

This car remained as the team’s #30 Peter Jackson entry for Seton and Alan Jones to drive in the endurance races. It led the Sandown 500 and looked on target to head a team 1-2 finish until it split the diff housing, opening the door for teammates Geoff Brabham and David Parsons to win.

The team’s luck was no better at Bathurst, this chassis lasting 147 of the 161 laps until it retired from fifth place with driveshaft problems.

GSR4 was retained by the Peter Jackson team in 1994 and ran as the #1 car of defending champion Seton in that year’s ATCC, updated to EB II specification with the addition of front winglets to the front spoiler.

Seton finished runner-up to Mark Skaife in the pointscore, claiming round wins at Phillip Island, Winton and the season finale at Oran Park as well as a total of six race wins (clean sweeps of the races at those rounds).

The car’s history then included Bathurst ’94 with Alan Jones/David Parsons before it went through the hands of privateers Claude Giorgi, Allan McCarthy and Charles Ryman – more details on these periods are published in The Falcon Files.

In early 1999, Ryman had a major testing crash at Lakeside in the car. The front right tyre blew at the kink and he suffered severe concussion and bruising with the car a complete write-off.

Sadly this became the third of the first four Falcon race cars built by Glenn Seton Racing to be destroyed and no longer exists.

However the car lives on in model form with the announcement of Biante’s 1:18 scale example of the car.

The V8 Sleuth Online Store has expanded in 2018 to include model cars, keep an eye on the website for further new releases and additions in upcoming weeks and months here.

Connor O'Brien
WHILE the new year will bring change in the Shell V-Power Racing Team’s ownership structure, there will be stability on the driver front. The Ford...