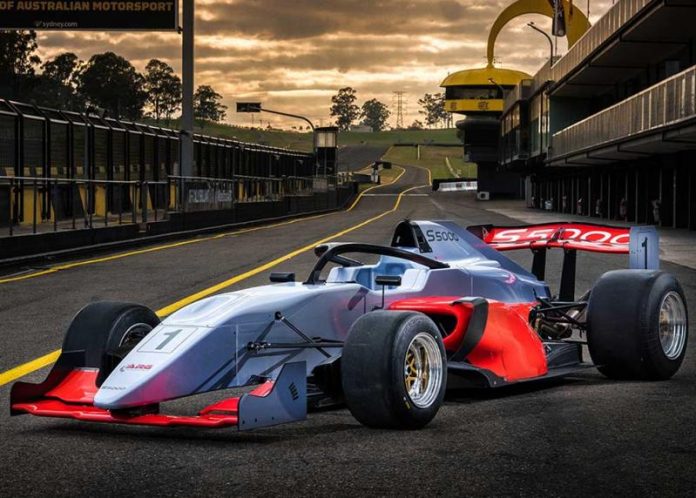 The new V8-powered category will race with the Shannons Nationals …

THE new S5000 category has revealed a preliminary six round calendar for its inaugural season in 2019, with possibilities for additional non-championship races still under discussion.

The 2019 Australian S5000 Championship will hold six rounds on the Shannons Nationals bill, including visits to Sydney Motorsport Park, Phillip Island, Winton, Sandown, and a pair of rounds at The Bend in South Australia.

“We are really looking forward to welcoming S5000 on to the Shannons Nationals calendar next year,” Eugene Arocca, CEO of the Confederation of Australian Motorsport (CAMS) said.

“There has been significant interest in this new category from competitors and fans alike. Feedback from the initial launch of S5000 was extremely positive and sparked plenty of passionate discussion about the exciting future of open-wheel racing in Australia. S5000 is a welcome addition to the Australian motor sport landscape.

“The Shannons Nationals in 2019 will be a terrific mix of really competitive categories, including some of the newest in Australia with both S5000 and TCR Australia set to debut at the first event in Sydney next year. We can’t wait.”

Beyond the six Shannons Nationals rounds, category managers are also investigating opportunities to hold non-championship events. Some of those events could be in New Zealand over next summer as part of a revived Tasman Series, a cornerstone of open-wheel racing in our corner of the world throughout the 1960s and 1970s.

“There are discussions also going on with Supercars, among other promotors, with a view to S5000 running at some of their events, which will certainly add some icing to the cake,” Chris Lambden, category manager for S5000 and the proponent of the initial Formula Thunder 5000 proposal, said.

“Confirmation of the CAMS Australian S5000 Championship schedule for 2019, headlining the Shannons Nationals, is great news all-round. It’s the ground base on which the future of S5000 will be built.”