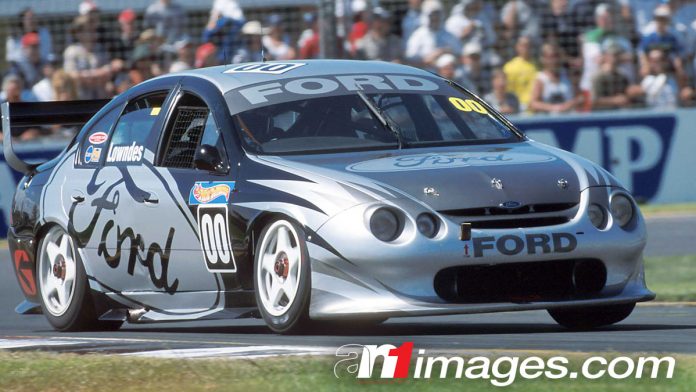 IS CRAIG Lowndes a Holden hero or a Ford hero in V8 Supercar championship history?

It’s an interesting question and how you answer probably depends more on which side of the manufacturer fence you sit, but recently we were asked what ever happened to Lowndes’ first Falcon V8 Supercar.The answer is – it’s still around!

Amid great publicity the three-time V8 champ signed with Gibson Motorsport for 2001 and made the call to jump from Holden to Ford.

The Gibson team – publicly fronted by founder and former owner Fred Gibson though funded and actually owned by Bob Forbes – had run Commodores since 1994, so needed to arm itself with a Falcon for its new big-name signing.

There was no time to build a car, so a deal was done to acquire an existing Stone Brothers Racing-built car, in fact the Pirtek-backed car driven by Jason Bright in 1999 and Craig Baird in 2000.

Having provided Marcos Ambrose with his first taste of an SBR Falcon at an end-of-season 2000 test in Queensland, chassis SBR AU2 became Lowndes’ #00 Falcon when the season started.

He tested it at Winton in late February in plain blue colours before the unique #00 black and silver livery was applied in time for Lowndes to make his Ford racing debut at the non-championship Albert Park event.

It didn’t take Lowndes long to win his first race in the ex-SBR Ford, ‘The Kid’ clinching victory in the Saturday race at the Clipsal 500 in Adelaide.

Lowndes drove this car through to the 2001 Queensland 500 where Neil Crompton joined him as co-driver. They were an early retirement and stepped into a new chassis for Bathurst.

Lowndes gave it another run at the non-championship Gold Coast event before it reverted to Rodney Forbes’ hands for the start of 2002.

However, ‘CL’ did end up back in this ex-SBR chassis for Eastern Creek after his regular ‘Green Eyed Monster’ was damaged in an accident with Max Wilson at Phillip Island.

Forbes drove it for the majority of that season, including the endurance races where rally ace Neal Bates co-drove.

00 Motorsport moved to BA Falcons in 2003 and was closed down mid-season, though this AU didn’t race again.

It was retained by Bob Forbes and not sold as part of the assets acquired by WPS Racing.

Returned to Lowndes 2001 livery, it’s since been run at Muscle Car Masters (in 2013 with Crompton at the wheel), spent time on display at the National Motor Racing Museum at Mount Panorama and is retained as part of Forbes’ private car collection.

It currently sits on display at the National Motor Racing Museum at Mount Panorama as of time of publication of this story.