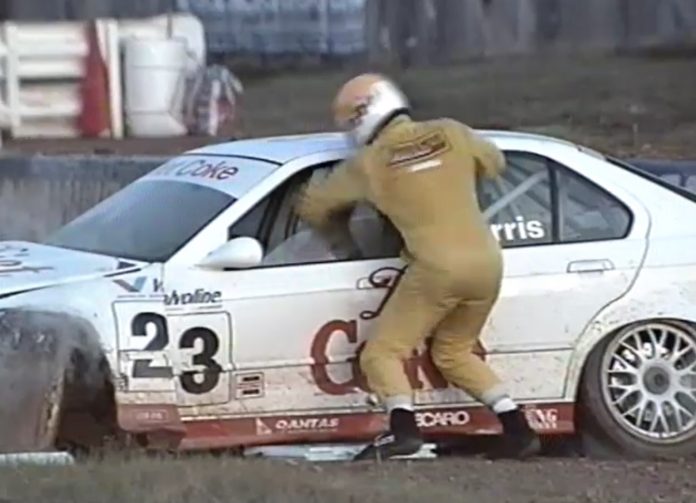 ONE of the cars involved in perhaps the most publicised and memorable on-track stoushes in Australian touring car history is being restored.

The car is the Diet Coke BMW 318i two-litre tourer driven by Paul Morris in 1994 at Winton on the day he and BMW teammate Tony Longhurst clashed on track, leading to the B&H driver punching ‘The Dude’ through the window after their cars had come to rest.

It’s one of the most replayed and publicised moments in Australian touring car racing history and now the ex-Morris car is being restored to return to the racetrack early in 2021.

The work is being undertaken by Track Tec Racing, based at Highlands Motorsport Park in Cromwell, New Zealand.

Track Tec is familiar to Aussie motorsport followers for their involvement in TCR racing, having most recently competed at the abandoned Australian Grand Prix ‘Asia-Pacific’ TCR supporting event at Albert Park.

The ex-Morris car is a 1992-build 318i model that is understood to have originally been raced by the Bigazzi team.

It was brought to Australia for the introduction of the two-litre series in 1994 and driven by Morris in the early rounds of the series, including winning the inaugural race at Eastern Creek in Sydney in mid-April 1994.

Morris took another win in the car at Phillip island and won both races at Winton, including the race he and Longhurst clashed in – it was declared and backdated a lap, meaning he was awarded victory given he had led the previous lap!

The car became the BMW team’s spare car and was used as the ‘T’ car at Bathurst that year before being sold to Kiwi driver Dennis Chapman.

Chapman, who still owns the car, used it in the 1994 Nissan-Mobil Series in New Zealand as well as the Super Touring support races at the last Adelaide Grand Prix in 1995, below left.

“Basically, a brand new engine has been made for it and it’s a full restoration project,” Track Tec’s Matt Waters told v8sleuth.com.au this week.

“The car has been used sporadically in recent years. It will be built to do NZ Historic Touring Cars and Dennis wants it back to how it used to be. We want to keep it as original as much as we can.

“The electronics will be MoTeC because you just can’t get the Pi stuff the car originally used. We’ll keep the Pi dash and it will look original but MoTeC will be behind it.

Just what livery and year specification the car will be presented in remains to be decided, though no doubt plenty of V8 Sleuth readers will be voting for Morris #23 Diet Coke livery as the car ran at Winton 1994!

LISTEN HERE: The V8 Sleuth Podcast ‘Super Touring’ special edition podcast, as the team take a look at the glory years of the category ‘Down Under’.