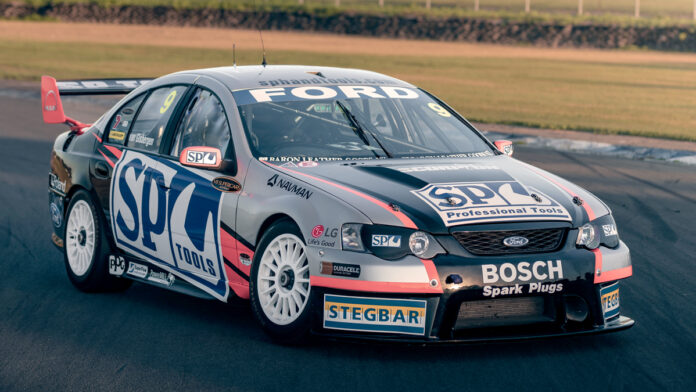 Stone Brothers Racing Ford Falcon BF, ex-Shane van Gisbergen SP Tools chassis with an amazing SBR V8 Supercar history and driven by some of the biggest stars of the sport.

Car has had a full chassis up body restoration by Richard Atkinson in New Zealand.

Bathurst runner-up car in 2007 driven by James Courtney and David Besnard for SBR.

Became Shane van Gisbergen’s SP Tools car for second half of 2008, his first season as a full-time V8 Supercar Championship driver. Car has been returned to this livery.

Also raced by Kiwi ace Scott McLaughlin in his first season in the Fujitsu Series (in Fujitsu colours) in 2010 and then again in 2011 when he scored his first race win at Queensland Raceway.

These two Kiwis are superstars of Supercars with five championship wins between them – a Supercar raced by both of these is indeed something very special.

This is a car with amazing pedigree, comes with both CAMS (Australia) and MANZ (New Zealand) log books, run three times at Skope Classic event, maintained by ex SBR and DJR mechanic Simon Grace with ex SBR engine man Pete Wallace having been to NZ to check over the engine.

Car comes with lots of body panels, doors etc including carbon rear guards, 3 sets of alloy wheels all refurbished with one set of wets and two sets of slicks.

All in very good condition. Car is located in Christchurch, New Zealand.

Seller is an experienced exporter and can assist buyer with exporting the car to its new home.

The perfect car for an investor, collector.