Home News SETON CHAMPIONSHIP CAR AND MEMORABILIA UP FOR GRABS 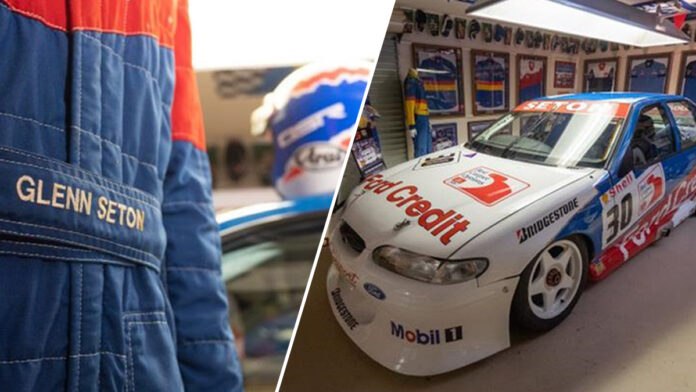 THE Ford Credit Falcon EL that Glenn Seton drove to victory in the 1997 Australian Touring Car Championship is up for auction.

Owners of the car for the past 17 years, Noel and Wendy Willoughby, are offering the car for sale complete with a signed helmet and race suit from Seton’s 1997 season.

Seton’s 1997 ATCC campaign and the full history of this car, GSR7, are detailed in ‘Seto: The Official Racing History of Glenn Seton’, available now in the V8 Sleuth Bookshop.

The title-winning campaign included 10 race wins and remains the last time both an owner/driver and a single-car team won the ATCC title.

Seton again raced GSR7 at Bathurst in 1997 and in the opening rounds of the ’98 ATCC before it was replaced by GSR8.

After three more outings with GSR in Neil Crompton’s hands in the 1998 ATCC, it was sold on and raced by a succession of privateers before the Willoughbys purchased it in 2004.

GSR7 was then restored and has made various public appearances since, including events such as the Muscle Car Masters, Gold Coast 600 and Bathurst 1000.

Glenn details in ‘Seto: The Official Racing History of Glenn Seton’ why winning the 1997 ATCC was his greatest racing achievement and described GSR7 as the only race car he remains sentimental about.

The online auction will run until July 31.