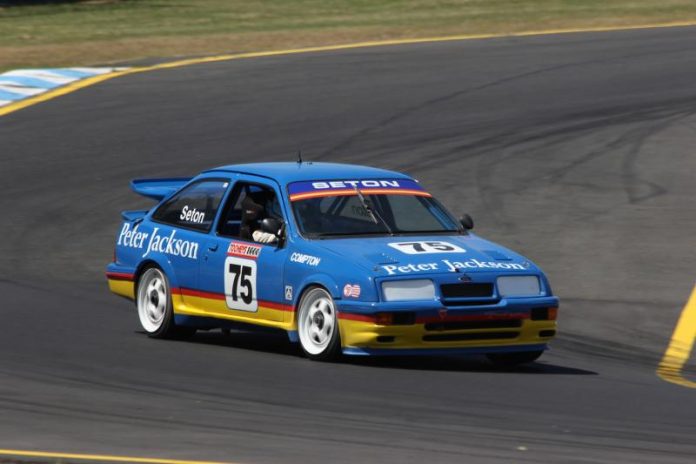 A SUNNY Melbourne played host to the final round of the 2014 Heritage Touring Cars Championship over the November 8-9 weekend at Historic Sandown with a first-time HTC race winner headlining a big weekend of racing.

Anthony Compton took his ex-Glenn Seton Peter Jackson Racing Sierra RS500 to his first race win in the category in the second of three races at Sandown.

The turbocharged Ford – built to replace the car destroyed in a fiery multi-car accident at Lakeside in 1989 – finished second in Race 1 on Saturday to Terry Lawlor’s GIO Nissan GT-R before winning Race 2 on Sunday after Lawlor’s ‘Godzilla’ beast failed to start due to technical gremlins.

Compton had a scare though in the last race on Sunday, forced to limp home to finish third in the 10-lap final due to being stuck in second gear after the gearstick snapped!

Starting at the back of the grid for Race 3 didn’t slow down Lawlor, who blitzed through the pack to win the final race of the season for the Heritage Touring Cars class.

Commodore driver Adrian Allisey turned in a brilliant weekend of racing in his Group A ‘Walkinshaw’ ex-Leeson/Willmington Holden to claim a third and two second places from the races.

One of the most impressive drives of the weekend though came from Bryan Sala in Race 2 on Sunday.

Misfire problems took his Sierra RS500 out of Race 1 on Saturday, forcing him to charge through from the back of the field and eventually finish third in Race 2 – impressive given it came in a five-lap race!

Up and down the field there were a range of stories, interesting cars and all sorts of tales.

The same car – later run by Alf and Tim Grant as a Sizzler privateer entry – was driven to third place at Bathurst in 1989 by Jim Richards and Mark Skaife and appeared in those well-known white, red and blue colours.

Things were spirited too among the Group C cars at Sandown with Milton Seferis’ ex-Peter Janson Commodore VH claiming honours in Race 1 from Fraser Ross’ XD Falcon after a last-lap pass.

Seferis again was the first Group C car home in Race 2 after Ross retired with damage before Seferis completed a clean sweep of the weekend in Race 3, leading home the ex-Murray Carter Falcon XE of Glenn Gerstel.

Seferis’ Commodore made its racing debut at the 1984 Castrol 500 at Sandown, so it was perhaps appropriate the ex-Janson/Garry Rogers VH Holden was successful at the same track 30 years later!

There were some casualties over the weekend – notably in the Nissan tent.

The 1984 Bathurst pole-sitting Bluebird of Brian Henderson ran on Friday but ignition problems sidelined it from Race 1 on Saturday and it did not take to the track on Sunday.

The sister car owned and driven by Adam Workman was a solid runner on Saturday and then again in Race 2 on Sunday before being sidelined with wheel bearing dramas ahead of Race 3.

After spinning on the warm up lap, the ‘big cat’ passed cars to re-claim its grid position prior to the field reaching the green flag, which was deemed unsatisfactory by Race Control.

All in all it was a great way to finish the 2014 season for the highly-popular Historic category which celebrates the ‘Legends of Bathurst’.

The Heritage Touring Cars category will return in 2015 for a six-round series with an additional non-points scoring event at the Bathurst Motor Festival at Easter.

The new season and HTC title chase will begin at Wakefield Park near Goulburn on February 21-22, 2015.

Many thanks to Bruce Moxon for use of some of his images from Sandown. We’ll be featuring more of Bruce’s photos from HTC events and Historic racing in future.