Home News SETON TO REUNITE WITH HIS PJ SIERRA 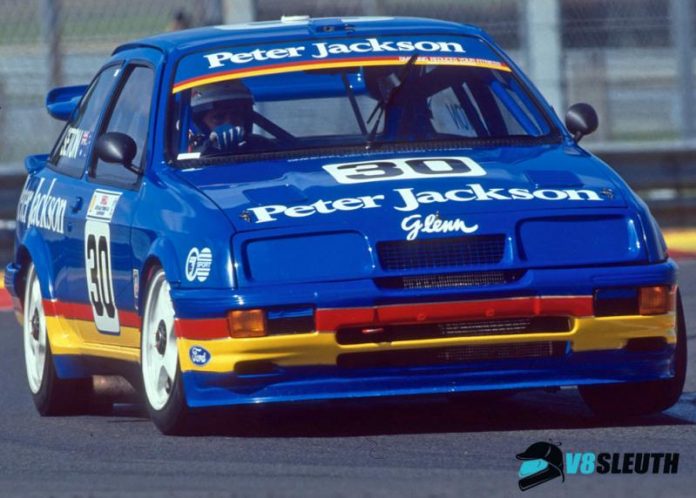 GLENN Seton is about to step back into his Group A Peter Jackson Ford Sierra RS500 for the first time in 25 years.

Seton will shake the car down at the ‘Island on the Thursday before the meeting, just one day after the 25th anniversary of his last win in the car, at the 1992 Symmons Plains ATCC round.

“It will be good to get back into the car because it was quite a challenging car to drive in its day with small tyres and lots of grunt,” Seton told V8 Sleuth this week from his home on the Gold Coast.

The famous blue Peter Jackson Sierra is now owned by veteran racer Rusty French, owner of Skye Sands and a partner in Prodrive Racing Australia, who bought the car in September last year from the estate of the late Bill Pye.

Seton said the car is very original, having hardly been used since its competitive life ended in 1992. It still has the original paintwork and 2.0-litre turbocharged Cosworth engine.

It was owned for a couple of years by Dandenong machinery dealer Jeff Beable but not raced before being bought by Melbourne dentist Eddie Sansil in 1994. Sansil raced the car rarely (notably at the 2012 Phillip Island Classic) before selling it to Pye in 2015.

Pye, a regular Touring Car Masters competitor, had the Sierra for only a year when he was tragically killed in a light aircraft crash last July. Veteran racecar preparer Mick Webb had begun restoring the car.

Since buying the Sierra – along with Pye’s TCM Camaro (which ran in Bob Jane livery) – French has had the Sierra rebuilt by his own mechanic, Peter Sportelli, who owns the ex-Bryan Thomson Chev Camaro that Seton raced at last year’s Muscle Car Masters.

Seton formed Glenn Seton Racing at the end of 1988 in partnership with his father Barry, the 1965 Bathurst winner, with sponsorship from Phillip Morris, via its Peter Jackson brand.

The team built its first Sierra from mainly Andy Rouse components over the summer of 1988/89 and raced competitively in the first two ATCC rounds before being severely damagedin a fiery crash at Lakeside.

Seton’s team built a replacement car in just five weeks in April-May 1989 from a spare shell (now raced by Anthony Compton in Heritage Touring Cars) and Glenn used this until Bathurst that year, when the car he will drive at Phillip Islanddebuted co-driven by Frenchman Alain Ferte.

Seton has not driven any of his Sierras since 1992 but briefly tested the ex-Colin Bond Caltex car about five years ago as well as the ex-Allan Moffat ANZ car seven years ago.

Having been a Touring Car Mastersregular in recent years, though, Seton in anything but rusty and is looking forward to driving the eye-catching Sierra.

“Yeah, it will be good to give the old girl a run,” he said.