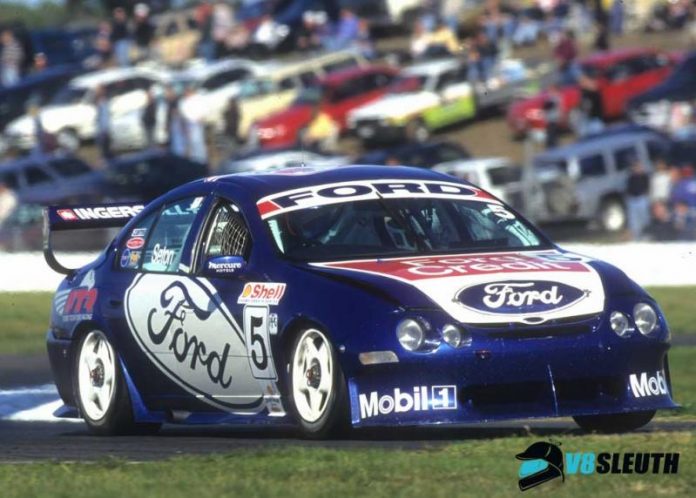 Glenn’s first AU set to return to its old self …

THE first ever Ford Tickford Racing Falcon AU driven by Glenn Seton is about to go undergo restoration to be returned to its original specification.

The car became Seton’s #5 FTR AU for the single driver rounds of the 1999 Shell Championship Series and was driven at the Queensland 500 and Bathurst that year by Geoff Brabham and Neal Bates.

Seton finished fourth in the series in 1999, in a year dominated by Craig Lowndes and the Holden Racing Team.

The Falcon was campaigned as the #6 car by Crompton during the 2000 Championship and was in service until Seton’s infamous testing accident at Phillip Island in late September of that year.

The two-time Australian Touring Car Champion fractured two ribs and knocked himself out in the accident, putting him out of action for Sandown and the Gold Coast that year.

The team sold FTR1 following the shunt, after assessing the damage too great to repair for its needs.

Victorian Bob Gill purchased the Falcon from FTR and ran it as a Sports Sedan in the years that followed carrying the 2000 FTR livery, though with a six-litre engine and sequential gearbox.

Current owner Murphy recently concluded a deal to acquire the car from Gill and is planning to restore it to full FTR period specification and livery.

Murphy is keen to hear from any V8 Sleuth followers or readers that may have, or have access to, any period FTR componentry including engine parts, in particular injection system.

Click here to get in touch with the V8 Sleuth team if you have any additional information or leads.

Tickford, which returned to the Australian automotive scene last year, is led by part of the ownership group behind 2015 Supercars Champions, Prodrive Racing Australia, which was born out of Seton’s old team as Ford Performance Racing in 2003.

The re-emergence of the brand, last seen in this country in 2001, is based around vehicle personalisation packages on current model Ford Ranger and Everest plus all local variants of the popular Mustang.

Click here for more on Tickford, its history, products and latest updates.