Home News SKAIFE: THE FACE OF AN ERA OF HOLDEN DOMINATION 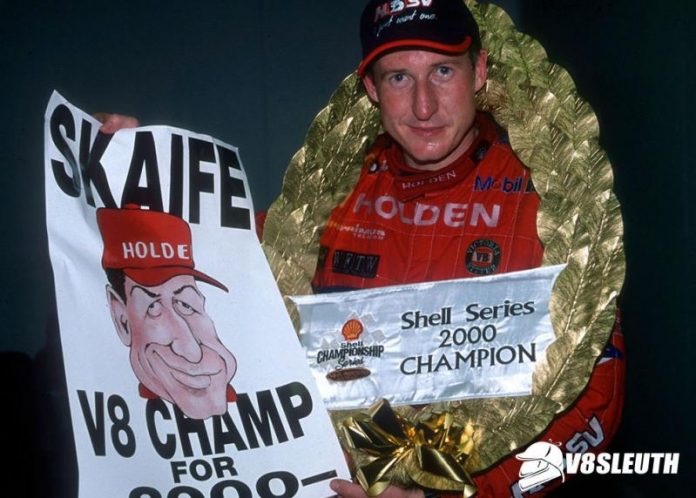 MARK Skaife was the public face of an era when Holden’s factory team dominated both the Bathurst 1000 and the then-V8 Supercars Championship.

For a time, the combination of Skaife, the Holden Racing Team and the Holden Commodore could do no wrong.

80 of his career tally of 90 championship race wins came in Commodores, among them three Bathurst 1000 victories as the lead driver at HRT.

Skaife first appeared in touring cars in the late 1980s as the latest young racer to come under the wing of wily team boss Fred Gibson, winning a pair of Bathurst 1000s and championship titles before receiving the offer that defined his career.

In mid-1997 he joined HRT, hired as the gun co-driver for Peter Brock with the expressed target to help the ‘King of the Mountain’ claim a 10th Bathurst victory in (what at the time was going to be) his final start in the event.

Skaife put the hallowed #05 Commodore on pole and Brock charged into the lead in the opening stint, but a fairytale finale was not to be; the car retired from the lead of the race in the middle stages.

Matched with Craig Lowndes as a teammate for 1998, the duo’s fierce but friendly intra-team rivalry pushed them individually to great heights, and spurred the team into an era where it was the benchmark for success and professionalism throughout pit lane.

Yet, as a combination, bad luck dogged them at the Mountain: Skaife and Lowndes led the 1998 race comfortably until punctures put them out of contention, while a tangle with a slower car in 2000 ended their hopes of winning and nearly derailed Skaife’s championship bid.

However, once he was paired with a special Commodore that became known as ‘the Golden Child’, Skaife became near-unstoppable.

He used ‘the Golden Child’ claimed back-to-back Bathurst 1000s in 2001 with Tony Longhurst and 2002 with Jim Richards, and clinched the championships in both years, underlining an era where Skaife and HRT couldn’t lose for winning.

But nothing lasts forever, and so it was with Skaife and HRT’s dominance.

The end of the era came in part through the collapse of the team’s parent company overseas, triggering a reshuffle of Holden’s factory-supported squads.

The most visible result was that Skaife purchased HRT and took over running the day-to-day aspects of the team, a move that diluted his razor-sharp focus between racing and the business of going racing.

While he was no longer the dominant force on the Supercars grid, the wins continued to come.

There was another Bathurst 1000 victory in 2005, this one adding Skaife to the short list of owner/drivers to have won the race, and it was a triumph that came on co-driver Todd Kelly’s 26th birthday.

In the midst of HRT’s reign Skaife took the mantle for the most race wins in championship history, and by the time of his full-time retirement at the end of 2008 his tally stood at 87, adding three more – including another Bathurst 1000 win in 2010 alongside Lowndes – in a co-driver role at Triple Eight Race Engineering.