Home News SLADE’S EARLY STEP BACK INTO A SUPERCAR 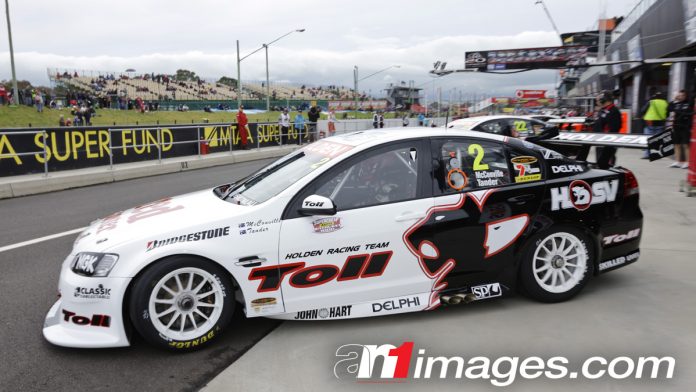 TIM Slade won’t have to wait until the Penrite Sandown SuperSprint later this month to get back behind the wheel of a Supercar.

The CoolDrive Racing pilot, who impressed in the weekend’s Repco Mount Panorama 500 prior to a round-ending crash in the Saturday race, will step behind the wheel of an ex-Holden Racing Team Commodore VE at this weekend’s Phillip Island Historic event.

The Blanchard Racing Team is preparing a spare Mustang for Sandown in a few weeks’ time, however Slade will get some laps before jumping into the Ford when he drives the car that Garth Tander and Cameron McConville drove to third place in the 2010 Bathurst 1000.

It has been returned to the unique retro livery it raced with on that weekend that celebrated the 20thanniversary of HRT’s first Bathurst win in 1990.

The HRT Commodore is now owned by South Australian collector Chris Kean and was previously raced in the Super2 Series by his son Josh.

“I formed a friendship with the Keans when Josh and I were racing at Brad Jones Racing and I went to the Adelaide Motorsport Festival through them for a few years and drove a few of their cars,” Slade told V8 Sleuth today.

“Josh had a major knee rebuild recently so he can’t drive and through some other mutual friends the chance to drive it has come up.

“I’ll go down to Melbourne this week to spend a few days in the workshop (at BRT) to give them a bit of a hand and then head to Phillip Island.

“When the crash on Saturday happened all I wanted to do was go home, but that wears off the next day and you just want to get back into the car and get back into it, so that’s why Phillip Island is a good opportunity to do that.”

Slade will share the track with a range of ex-V8 Supercars and invited cars at Phillip Island this weekend.

They’ll run in a SuperSprint event as part of the major Historic meeting. The SuperSprint including Slade and the Commodore are run with cars on the track at race speed however not engaging in racing.

The Phillip Island Classic had previously been announced as a non-spectator event due to COVID restrictions, however 1000 tickets for each of Friday, Saturday and Sunday have been made available for spectators.

They can be purchased here.