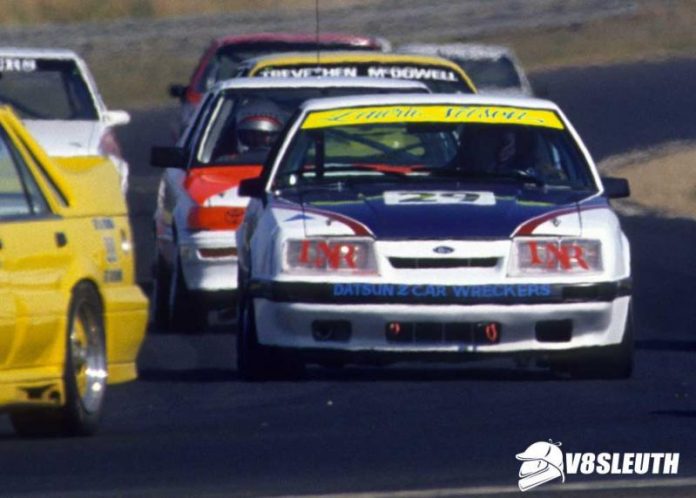 Lawrie Nelson holds the honour of being the last driver to race a Mustang at a championship event, the pony car’s most recent start coming at the Phillip Island round of the 1990 Australian Touring Car Championship.

But the fate of the Mustang that day has been something of a mystery – one solved by the current issue of Australian Muscle Car magazine.

Period sources conflict over whether or not Nelson and his Mustang actually did start the race, some recording the #29 Ford as a DNS (Did Not Start) while others list it as a DNF (Did Not Finish) with zero laps.

In part of a feature story on the car by Australian Muscle Car, the driver himself was able to shed some light on what happened.

“As we did the warm-up laps it was alright,” Nelson told AMC.

“But as we rolled down slowly to our position on the grid she developed a nasty overhead rattle, so we just pulled off.”

Looking at the Channel 7 vision of the race Nelson’s Mustang is clearly shown in its 29th grid position moments before the lights go green, but next appears parked on the grass verge on the outside of the main straight as the leaders complete the opening lap.

With the television coverage proving Nelson faced the starter’s orders the Mustang can officially be recorded as having started the race, albeit not finishing it and failing to complete a single lap due to engine problems. The Mustang-runners this weekend will be hoping history doesn’t repeat!

Pictures of the Nelson Mustang and every other Ford that competed in the Bathurst 1000 can be found in our limited edition book Ford At Bathurst, The Cars: 1963-2018, the ultimate photographic history of the ‘blue oval’ at the Mount Panorama enduro.

The AMC feature recounts the Mustang’s build and Nelson’s time racing the car during the Group A period – although Nelson concedes there’s “not much he wants to remember” about the machine! – and the rule-bending that has, indirectly, helped give it a successful second life as a CAMS historic race car.

AMC issue #107 also tells the story of a barn-find Holden Torana A9X that raced in the 1979 Hardie-Ferodo 1000 which has sat in a self-storage garage for the past 15 years, and profiles multiple Bathurst, championship (and Australian Grand Prix!) winning team chief Jeff Grech, revealing tales from his time at the helm of the Holden Racing Team during its glory years.