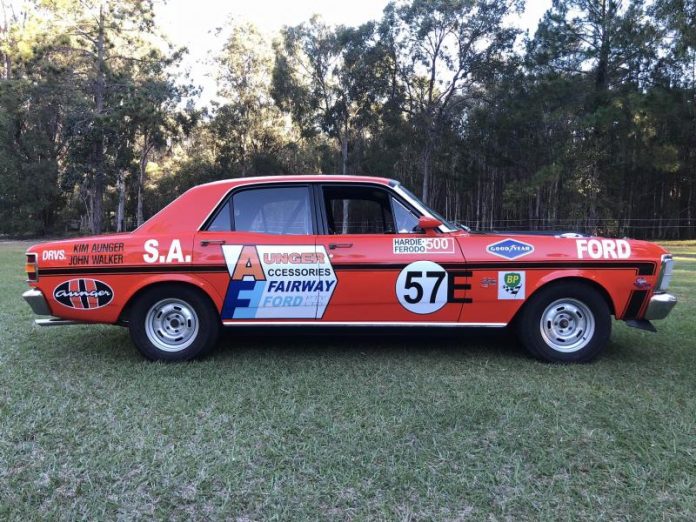 A RARE piece of Ford and Bathurst history has just been placed on the market here in the V8 Sleuth Online Showroom.

The car is a 1970 Ford Falcon XW GT-HO Phase II that competed in that year’s Hardie-Ferodo 500 at Mount Panorama, Bathurst, in the hands of South Australians Kim Aunger and John Walker.

One of a handful of cars from that year’s ‘Great Race’ known to have survived, it’s being offered for sale by its private collector owners, who are open to offers above $500,000.

Contact the V8 Sleuth Office here if you’re a serious potential purchaser of this impressive piece of Aussie muscle car history and we can connect you with the owners.

The car was one of 14 XW Falcon GT-HO Phase IIs to compete in the 1970 Bathurst race.

Having started 28th on the grid, it completed 18 laps before bearing problems took it out of the race.

It raced the following weekend at Mallala with Aunger at the wheel and won a Series Production race, broke the lap record for the category, emerged unscathed and was then laid up.

The same family later owned it from 1973 onwards before the current owners acquired the car, which now has 89,000 miles on the clock.

This Falcon V8 has a re-issued CAMS Log Book and a highly sought-after Gold Certificate of Description.

The minimum requirements for a Gold COD from CAMS include a car having unquestionable provenance and full detail of prior ownership with no gaps or unsubstantiated entries and original mechanical specification.

This particular Falcon is one featured in one of over 750 photos in our new ‘Ford at Bathurst, Every Car from 1963 to 2018’ book that can be ordered online here now.

The Brambles Red Falcon made a special appearance at this year’s Supercheap Auto Bathurst 1000 in the Heroes & Legends Marquee at Bathurst this year as part of the celebrations surrounding the final year of Falcon competing in ‘The Great Race’.

It was the first time the car had been back to Bathurst since its one-off Mountain appearance 48 years prior!

Currently unregistered, this Falcon has personalised plates with the same number and colours as it originally was registered with.

Click here for further information on this piece of Aussie muscle car history.