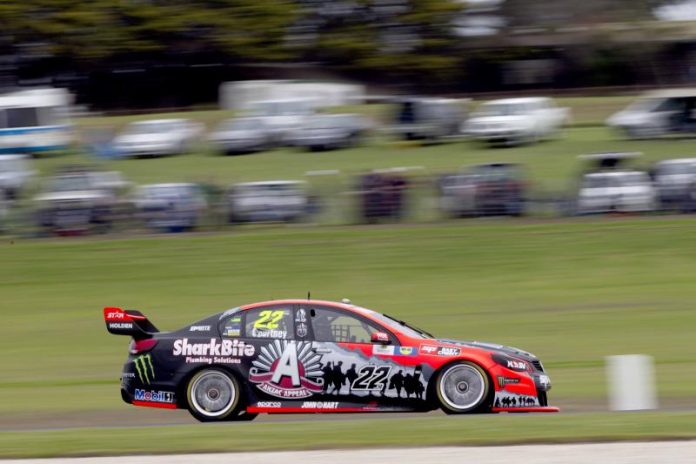 THE announcements from V8 Sleuth’s model car partners are continuing thick and fast with Biante Model Cars this week confirming that they are producing the special ANZAC Appeal Holden Racing Team Commodores from the 2016 season’s Phillip Island event.

To be produced in both 1:18 and 1:43 scale, the cars competed in the hands of Garth Tander and James Courtney at the WD-40 Phillip Island SuperSprint.

After being introduced in the 2013 season, HRT’s ANZAC tribute became an annual initiative by Holden and HRT. It was supported by the Returned & Services League, with the livery raising awareness and funds for the RSL’s annual ANZAC Appeal.

The 2016 version saw Holden’s famous HRT lion and driver logo again replaced by the RSL’s ANZAC Appeal Rising Sun logo, with a silhouette of ANZAC diggers from the original Gallipoli landing featuring on each side of the car and bonnet. The ANZAC Appeal logo was also featured on the boot lid, front windscreen, and on the rear wing.

Given the national significance of the day, and the time of the year, the announcement of the 2016 HRT ANZAC Appeal liveries is that Biante is proud of and they have gained special approval to produce it. In staying true to the purpose of the ANZAC livery each year, part proceeds of the sale of this model will be donated to the RSL’s ANZAC Appeal.

These replicas of the 2016 Holden Racing Team ANZAC Appeal Commodores in both 1:18 and 1:43 scale will be produced in die-cast with the 1:18 featuring fully opening parts other than the boot with detailed engine bay, highly detailed racing interior and faithfully replicated livery.

They will be produced in an exclusive limited edition quantity and will include a numbered Certificate of Authenticity.

Pre-order them now from Biante Model Cars here via their website – and check out their other April announcements too, including a satin black body VF Commodore V8 Supercars, the Commodore VF SSV Redline II 2017 in Spitfire Green, the HSV E3 Maloo R8 20th Anniversary Ute in voodoo blue and a Verdoro Green with Antique Gold Holden Monaro HT GTS 350.