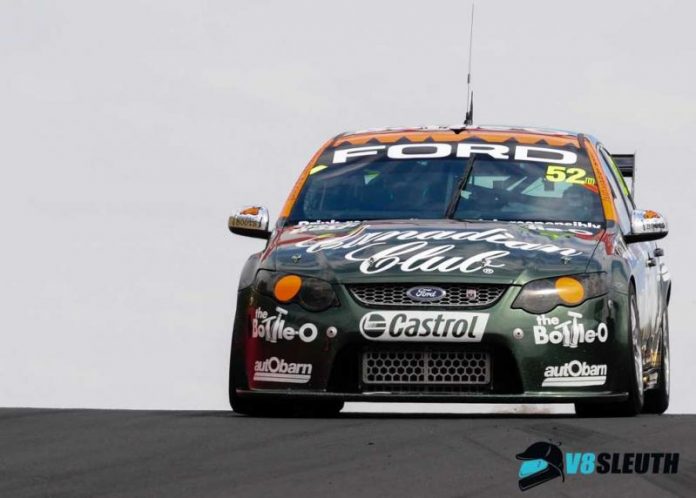 THE Bottle-O Falcon that very nearly claimed victory in the 2012 Supercheap Auto Bathurst 1000 will join the Kumho V8 Touring Car Series for its opening round at Sydney Motorsport Park at the end of next month.

New South Welshman Damien Grima will make his debut in the series at the season opener, driving the Ford Performance Racing-built FG Falcon that David Reynolds and Dean Canto drove to a narrow runner-up result at Bathurst eight years ago.

The car is included in the nearly-sold-out book 'Ford at Bathurst: 1963-2018' featuring a photo of every Ford to compete in The Great Race in this time – order it here now.

The car carried a special The Bottle-O green livery paying tribute to the 1967 Bathurst-winning Falcon XR GT of Harry Firth and Fred Gibson, one of many cars to run a special livery as part of the celebration of 50 years of ‘The Great Race’.

Grima’s Falcon was originally built by FPR in 2009 and formerly raced by Mark Winterbottom, Steve Richards and Will Davison, as well as spending time in Chaz Mostert’s hands in the 2012 Super2 Series before it was turned over to become Reynolds’ #55 entry.

The car has since competed in the Super2 Series in the hands of Kristian Lindbom (for Evans Motorsport Group) and Marcus Zukanovic’s Action Racing, last appearing in 2016.

Grima’s Falcon competed at the Challenge Bathurst event last November and has been returned to the livery it carried at Bathurst in 2012.

The first round of the 2020 Kumho V8 Touring Car series will be part of the Shannons Motorsport Australia Championships at Sydney Motorsport Park on March 27-29.